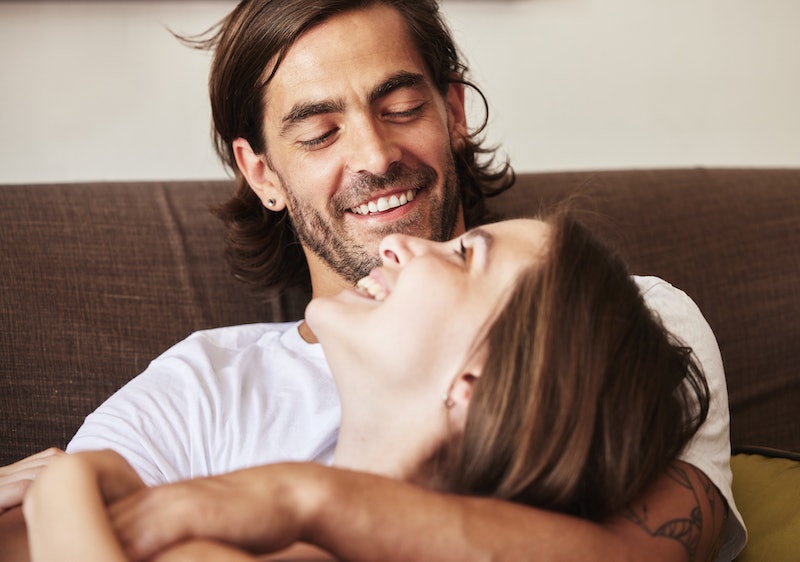 When you move in with a significant other, there are a lot of things that you need to get used to: Their organization system, their sleep schedule, sharing your space, and maybe even acquiring a new immune system. Yes, you read that latter item correctly: A new study found that moving in with a partner causes your immune systems to become develop similarities. A team of researchers at the University of Leuven monitored 700 participants over a period of six months, and they discovered some pretty remarkable findings about what happens to the immune system when people live with a partner.

The most significant finding was that those in romantic relationships developed immune systems that were quite similar to each other: There were 70 married couples amongst the 700 participants, and for those who were married, they showed an average of 50 percent less variation in the makeup of their immune systems than those who were randomly compared.

Although the study didn't examine non-married couples, lead researcher Adrian Liston told Quartz that he doesn't believe their findings would be much different if they looked at the immune systems of non-married couples who are living under one roof. “Though we didn’t study unmarried couples, I believe cohabiting couples would show similar results,” Liston said. The research team postulates that this similarity comes from, simply put, sharing germs. When you are breathing the same air, eating the same food, and swapping bodily fluids with someone constantly, it kind of makes sense that your bodies would become more similar, right?

This is far from the only change that happens in your body when you cohabitate with your partner, however. Let's take a look at four more examples of these changes, which might give merit to the idea of becoming one with your partner — literally.

A study of 8,700 married couples found that couples had a large increase in their level of emotional health when they moved in with a partner, especially for women. Young women who moved in with a significant other had an increased level of emotional well being, compared to when they were living single. This same change didn't happen for men unless they got married, but both men and women experienced a positive change in their emotional health when they gave living with a partner a second chance after initial failure. So, moving in with someone can potentially help you to become more internally sound.

2. You're More Likely To Have Children

No, cohabitation doesn't cause immaculate conception, but it can really increase your odds of getting pregnant. A 2013 report from the CDC found that 20 percent of women who were living with a partner for the first time would become pregnant within a year of moving in together, which is a five percent increase from 20 years prior. The good news is that if you don't want kids as a result of moving in with your partner, all you need to do as a couple is to be vigilant about your use of contraception.

3. Your Brain Don't Handle Stress As Well — If You're Living Together But Not Married

A University of Virginia study on the stress levels of people living together and married couples found that those whom were married had much lower levels of activity in their hypothalamus, which is the region of your brain responsible, in part, for managing stress. This hypothalamus also processes functioning that is essential to survival and health, such as your sleep patterns and sexual functioning. The study found that for those who were cohabiting but not married, the level of activity in their hypothalamuses was heightened, which is a possible neurological indication of stress, according to lead study author Jim Coan.

However, he felt that some nuances in the results created by looking at same-sex couples who were commited by not legally married, who didn't show this same increase in activity in their hypothalumeses. So, he thinks it has more to do with the level of commitment that cohabiting couples have, as to their level of stress."I think it has to do with the conceptualization of one's relationship. Asserting cohabitation is basically asserting that one is not 'locked into; a commitment," he told Science 2.0 News. Thus, if you have more of a commitment behind your cohabitation, you may be able to avoid this potential downfall.

Want more of Bustle's Sex and Relationships coverage? Check out our new podcast,I Want It That Way, which delves into the difficult and downright dirty parts of a relationship, and find more on our Soundcloud page.

More like this
How Ovulation Affects Your Sense Of Smell, Libido, & More
By JR Thorpe and Lexi Inks
I Spent 2 Years Trying TikTok’s Dating Advice
By Kailynn Johnson
5 Signs You Have A Toxic Relationship With Yourself
By Lexi Inks
Why Being “Too Sensitive” In Relationships Is A Good Thing
By Lexi Inks
Get Even More From Bustle — Sign Up For The Newsletter
From hair trends to relationship advice, our daily newsletter has everything you need to sound like a person who’s on TikTok, even if you aren’t.