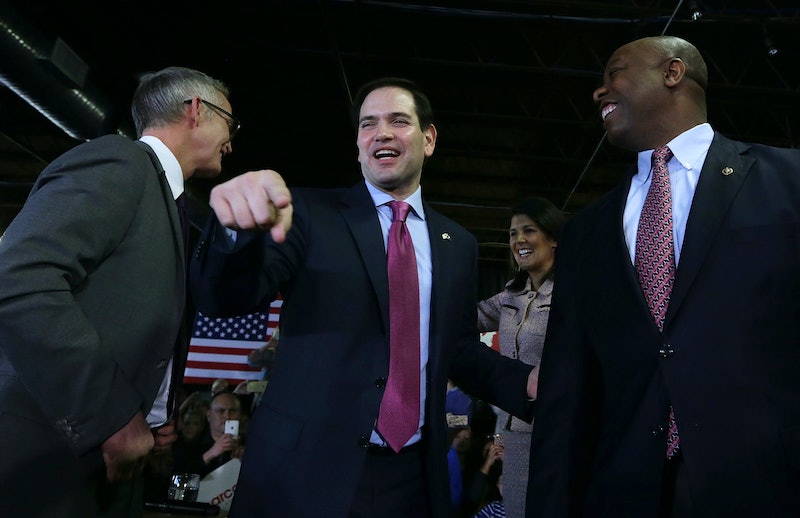 Marco Rubio does a great job of maintaining the appearance of a professional politician, but don't be fooled: The U.S. senator from Florida knows how to have a good time. As a 2016 presidential candidate, Rubio has carried himself with poise and confidence at debates, rallies, and town halls. He is so put together that everyone noticed when he messed up in the New Hampshire GOP debate. (You know, when Chris Christie called him out for being a 25-second soundbite.) In true Rubio form, though, he bounced back with his speech after the New Hampshire primary results were announced, when he smiled lovingly at a crowd chanting, "Mar-co! Mar-co! Mar-co!" From crowd chants to his taste in music, Marco Rubio is secretly a frat bro — who may or may not even lift, bro.

At the GOP town hall hosted by CNN on Feb. 17, Rubio mentioned his football career more than once (once is definitely enough). He also talked about how he coaches his sons' football team; unlike other dads, he's a Cool Dad. As a senator and presidential hopeful, Rubio has spent a lot of time in the national spotlight, which requires him to be calculated and professional. However, as we get closer to the general election and he tries to be more candid with voters in an effort to shed his Robot Rubio perception, one thing becomes clear: Marco Rubio is secretly a bro.

Back in the day — like, way back in 1989 — Rubio played football for the Tarkio College team in Missouri. He received a scholarship to play and was the defensive back for one season before he transferred schools. Not only does Rubio love to remind people of his short stint as a jock, but he also went so far as to make this ad, in which he's catching a football and answering questions. I can hear him now: "Bro, do you even campaign?"

Just before voters headed to the polls to vote in the Feb. 9 New Hampshire primary, Rubio invited them to his Super Bowl party. More than 300 people gathered in a cold industrial indoor sports center in New Hampshire and anxiously awaited the arrival of the food— er, I mean Rubio. When he finally showed up, he was introduced by none other than former football player Rob Konrad, who played for the Miami Dolphins (Rubio's all-time favorite team).

From loud music to incessant yelling from the crowd to countless boxes of Little Caesar's pizza and store-bought six-layer dip, Rubio lived up to his bro expectations on the most bro "holiday" of the year. Before he left the event, he told the crowd, "Enjoy the Super Bowl; it doesn't really matter to me, since the Miami Dolphins haven't been in it since 1984 or 1985." Classic bro IDGAF attitude. Smooth.

His Town Hall And Rally Music

If you've ever been to a Rubio event in person, then you've experienced the oddness that is his campaign playlist. At almost every town hall and rally in New Hampshire, whenever Rubio walked on stage, "Thunderstruck" by ACDC played at the highest volume the venue speakers could manage. It seemed to be just the right mix of bro and inspiration to pump him up before the big game— er, town hall.

As if this music choice didn't confirm his bro status, while all the other Republican candidates played country music, Rubio played Flo Rida's "My House" at every. Single. Event. It usually played when he was taking selfies with supporters, because that's just the kind of chill and selfless (ha ha) bro he is.

Once the public caught on to Rubio's secret bro alter ego, his campaign rolled out swag that aptly renamed him "Rubaeo." Just before the New Hampshire primary, the Rubaeo T-shirts appeared all over the Internet for supporters to buy. Rubio is such a chill bro that he became the ~official~ presidential bae for all the young'uns who think he's totally on fleek. Would you call Jeb Bush your bae? Probably not, because Bush isn't a bro. Rubaeo, on the other hand, is a bro, and there's no denying that.

At the GOP town hall hosted by CNN, Anderson Cooper told Rubio that he was surprised to learn that Rubio likes electronic dance music (EDM). Rubio admitted that was the case, so of course Cooper's next question was, "Have you ever been to a rave?" Rubio denied ever attending such an event, but that coy smile confirmed that the cool bro has definitely done so.

If you've been keeping up with his campaign, then you probably remember Rubio's fashionable boots, which were all the rage for a few weeks. Other Republicans criticized him for the choice, making fun of the high heels — Rand Paul likened them to something Whoopi Goldberg would wear. Rubio bounced back from the haters' comments in the most bro way possible: by instead focusing his talking points on guns and football. Because bros LOVE guns and football.