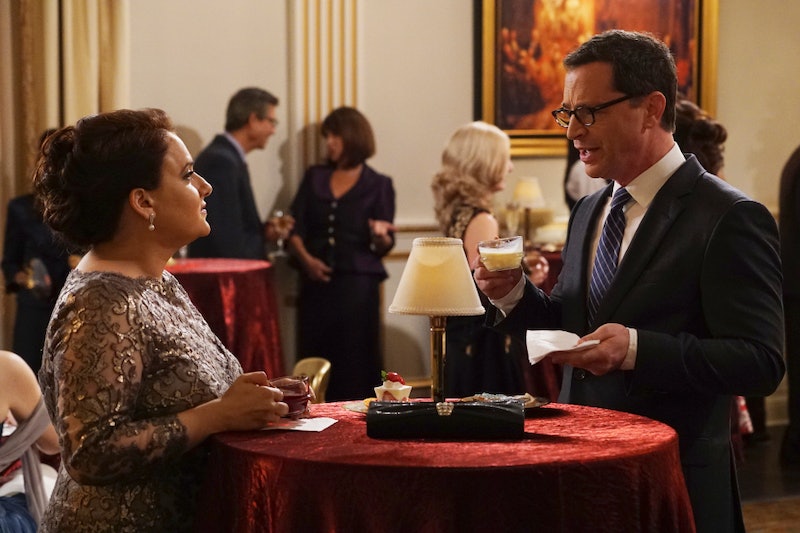 Now that Mellie Grant is running for president on Scandal, it seems inevitable that she'll win and become the Shondaland version of the USA's first female president. But after Thursday night's new episode, she might just have some competition. After Lizzie Bear hatched a plan to convince Susan Ross to run for president opposite Mellie, it's happening. And the way she got convinced to do the job is making me kind of mad at David Rosen.

But over the course of their time together — including a stop at Gettysburger, which I totally wish was a real place — it became more and more obvious that it wasn't just David trying to convince Susan to fit in with Lizzie's agenda. Nope, they were actually falling for each other, a post-burger kiss included. And as far as I can tell, those feelings are real... unless David's a way better liar than I ever thought he was. The only problem? They had the entire day to get to know each other better, and David ended up finding out that what Susan Ross truly wants to do has nothing to do with what it would mean for her to take Fitz's place in the white house.

So when David ended up back in his office at the end of the day, Lizzie was pretty impressed with him. The paperwork had been filed, and just like she wanted, Susan had officially entered the running. But as she described it, she "likes America and wants it to call her," and it sounds a little too much like she's doing this to win David over.

It's definitely going to be fun to watch the showdown between these two, and it's hard to decide if Susan or Mellie would make a more awesome president. Mellie's the right amount of determined and ruthless for the job, and she has all that experience as First Lady. But Susan's so good-hearted that it'd be hard to see her lose. This election year is definitely going to be interesting... especially with Olivia on Mellie's team.

But for the record: Even if she's not president, Susan's totally the person I want holding my hand on a bad day. Why is she the best?!