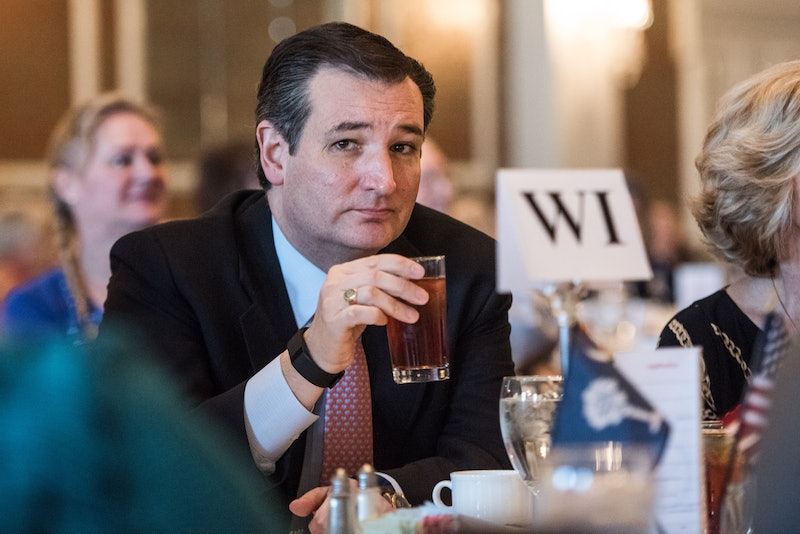 Ted Cruz’s already slimy presidential campaign achieved a new level of sliminess on Thursday. First, Cruz’s campaign website posted a fake image of Marco Rubio and President Obama shaking hands without disclosing that it had been edited. Then, when asked, the Cruz campaign denied that it was Photoshopped. Thankfully, the entire Internet quickly realized the image was forged, and pretty soon, the #CruzPhotoshop meme swept over Twitter.

Cruz used the (fake) image to highlight Rubio’s support for fast-track authority, the bill that expedited Obama’s ambitious trade deal with Asia. The picture — which, to be clear, looks pretty Photoshopped to begin with — shows a grinning Rubio shaking hands with a smirking Obama, with the text “THE RUBIO-OBAMA TRADE PACT” plastered atop the image.

Damning, and yet alas, not real. It’s true that Rubio voted for Trade Promotion Authority — but then again, so did almost every other Republican in the Senate. The image, on the other hand, is a wholesale fabrication.

When confronted about this, a Cruz campaign spokesperson said that the campaign “would not use a photo that is not authentic.” After somebody tracked down the stock photo that served as the basis for the manipulation, Cruz spokesman Rick Tyler told CNN, “If Rubio has a better picture of him shaking hands with Barack Obama, I’m happy to swap it out.”

The Cruz campaign removed the image from its website on Thursday, though it characteristically didn’t admit any wrongdoing. But Twitter quickly got to work, launching the #CruzPhotoshop meme to prove that Rubio — and Cruz — had done all sorts of things that they hadn’t.

Former Republican top dog Mitt Romney even made a cameo.

If nothing else, the meme gave us this image, which may have been a bit off-theme but is totally worth including because, well, just look at it.

Dirty tricks like this have popped up in Cruz's campaign before. Before the election caucuses, his team sent out mailers with the words "VOTING VIOLATION" in huge red letters, prompting Iowa's secretary of state to clarify that these weren't official government documents. On the night of the caucuses, his campaign spread rumors that Ben Carson had dropped out of the race, which he hadn't. When confronted about it at a debate, Cruz claimed that his campaign team was simply repeating what it had heard on CNN, but CNN denied having ever reported that Carson was withdrawing from the race and called Cruz's comment "a flat-out lie."

All of this Rubio Photoshop nonsense is reminiscent of a 2006 incident wherein the Ohio Republican Party circulated a Photoshopped image of Al Franken to smear Senate candidate Sherrod Brown, for whom Franken was campaigning. It backfired: Brown won his Senate race anyway, and Franken himself won a Senate seat in Missouri two years later.

In all likelihood, this one incident won’t move any votes. On the other hand, several of Cruz’s rivals have recently attacked Cruz for his dishonesty, with both Rubio and Donald Trump flatly accusing him of lying at the last debate. If you’re a candidate who’s been saddled with a negative stereotype, it’s generally not a good idea to confirm that stereotype through your own actions. That’s precisely what Cruz has done, and while this may not be the most consequential of unforced errors, it’s an unforced error nonetheless.