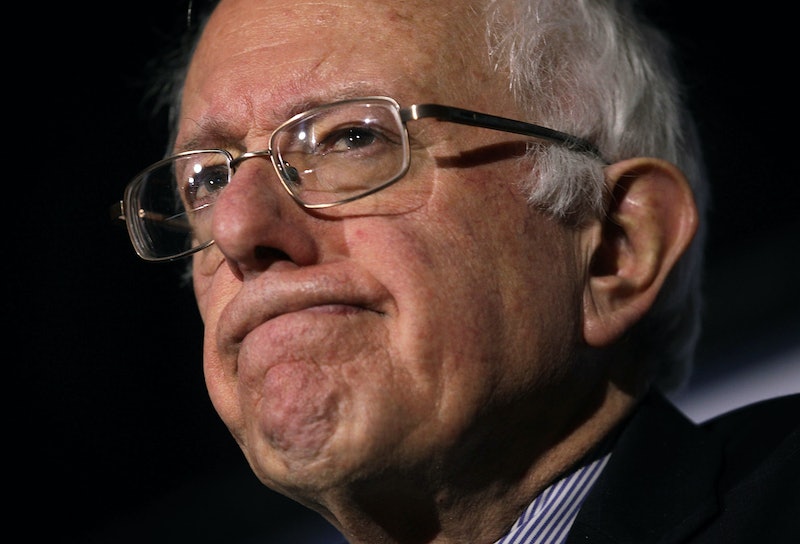 When it comes to gender politics, Democratic candidate Bernie Sanders and his team have gotten into some murky water as of late. During a Democratic town hall on Thursday, Sanders said he was a "strong feminist" and referenced how he had once been labeled — and accepted — the title of being an "honorary woman." His voting record certainly shows an unwavering allegiance to women's issues, but by no means should being a champion for women's rights be conflated with actually being a woman. Sanders personally identifies as a man, so even in jest, talk like this can be problematic.

Now while I've argued before that Sanders is women's best choice for president, the senator's decision to bring up the "honorary woman" label is troublesome. In all fairness, he did not originally give himself the nickname. During MSNBC's town hall, Sanders said it was feminist icon and activist Gloria Steinem who "made him an honorary woman" years before in 1996, when she campaigned for him during his Senate re-election against a female opponent.

Steinem's warm feelings toward Sanders doesn't seem to have continued into 2016, however. Oddly enough, Steinem herself was in hot water recently with the feminist community for her comments about Sanders, in which she said young women only supported the male Democratic candidate to "meet boys." For this year's presidential election, Steinem supports his Democratic opponent Hillary Clinton. Bringing up the "honorary woman" label now is also particularly bad timing on Sanders' part — it comes just days after his campaign mate Killer Mike was called sexist for quoting an activist who had said, "A uterus doesn't qualify you to be president." These two comments seem to show a rare tone deafness in the Sanders campaign, one that they can't necessarily afford while trying to win and hold onto the female vote.

Likewise, the choice to piggyback off of an already problematic label, as opposed to dismissing it, is where Sanders falls into a trap. With a laugh, he told the Democratic town hall audience that he didn't "know exactly" what the label meant, but "accepted it" when Steinem went out to campaign for him. As a self-proclaimed feminist, the Vermont senator should have looked at the phrasing more deeply. By merely accepting this nickname, regardless of who gave it to him, it seems to show that Sanders was not willing to explore its possible negative implications and take it at face-value for his own political gain.

Instead, Sanders ought to distance himself from rhetoric like this. It can be labeled sexist or even transphobic in its own right. The issue of identifying as a gender outside of what you were labeled at birth is both a delicate and extremely significant one for the transgender community. By calling himself an "honorary woman," Sanders treads a fine line that may be seen as dismissive of transgender people and their right to properly identify with the gender they choose. And though that probably wasn't the senator's intentions, it only takes a moment for a phrase like that to be misconstrued.

Furthermore, Sanders is a stronger candidate when he does not masquerade as an "honorary woman." He needs to be able to identify the struggles of women without trying to co-opt the struggle entirely. As Sanders' track record shows, there's no doubt he's a "strong feminist." He is more than capable of representing women's interests just the way he is — as a man.