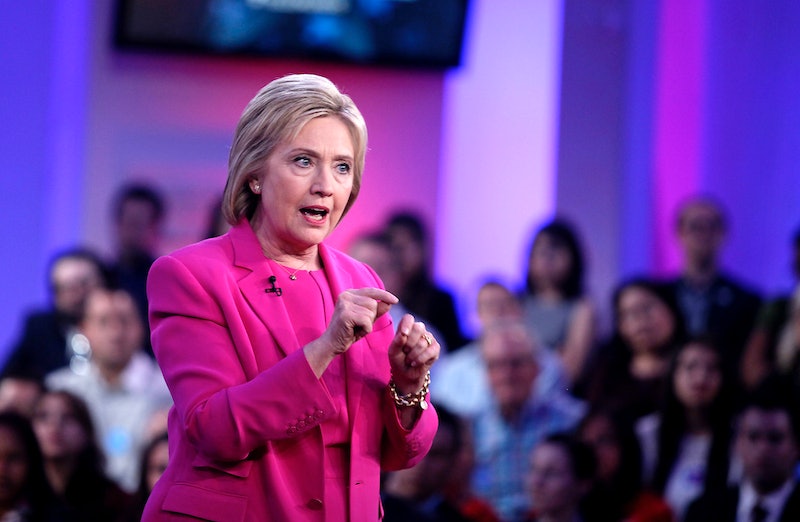 With the Nevada caucus quickly approaching, Hillary Clinton got more passionate about her immigration agenda in an apparent attempt to attract Latino voters in the state. The former secretary of state has advocated for immigration reform and a clear path to citizenship since launching her 2016 campaign, but was reluctant to say whether or not she would take action on the issue in her first 100 days in the Oval Office. However, Clinton changed her tune on Thursday, saying in a MSNBC/Telemundo town hall in Las Vegas that she would make a move in her first three months as president.

Clinton was specifically asked about immigration because she hasn't previously listed it as a priority for her first 100 days in office. At first, she kept up her somewhat ambiguous answer by saying: "If I'm fortunate enough to get the Democratic nomination, I will immediately begin working on the priority legislation that I want the Congress to deal with right away, and immigration reform will be among those issues." Moderator José Díaz-Balart wasn't satisfied with her reply though, and directly asked if she promises to deal with immigration in her first 100 days in the Oval Office. Here's where the major difference occurred — Clinton said she absolutely would.

"I'm going to introduce my priority legislation and this is at the top of that list. It's going to be introduced," Clinton said Thursday of her plan for immigration reform. "And then I'm going to work as hard as I can to make sure that we get it moved through the Congressional process." She pointed out that she can't fix America's immigration problem on her own, calling for voters to elect a Democratic Senate along with her as president.

Moving immigration from her "priority" list to her "first 100 days priority" list signifies that she's much more committed to creating actual change on the topic. Presidential candidates have a ton of priorities (considering there are a multitude of problems facing the country), but the ones they pledge to act on right off the bat highlight which agendas are really most important to them.

Sanders pledged to move on immigration in his first 100 days as president while in Nevada months ago, though only said that it's a "top priority" on Thursday, conceding that when reform happens will largely depend on Congress. "I'm not a dictator here," he said at the town hall. "It has to do with a little bit of cooperation from the Congress. But, it is a major priority when you have 11 million people living in the shadows."

Making this distinction just two days before a Democratic caucus in a state where about 28 percent of the population identifies as Latino or Hispanic was no coincidence on Clinton's part. She needed to match, if not exceed, Sanders' commitment to helping immigrants in order to secure Latino voters' support in Nevada. Clinton won the Nevada caucus in 2008, and it would be an embarrassment to lose this time around.

Her immigration reform plan focuses on creating a pathway to citizenship, keeping families together, and ending family detention for people who arrive at the border and pose no threat, which isn't much different from Sanders' plan. One of the only differences between the two Democrats' agendas is that Sanders has vowed to expand upon President Obama's executive orders on immigration, while Clinton simply supports the ones that already exist.

Ultimately, Nevada voters will decide on Saturday which Democratic presidential hopeful they think will help immigrants — and the whole nation — the most.