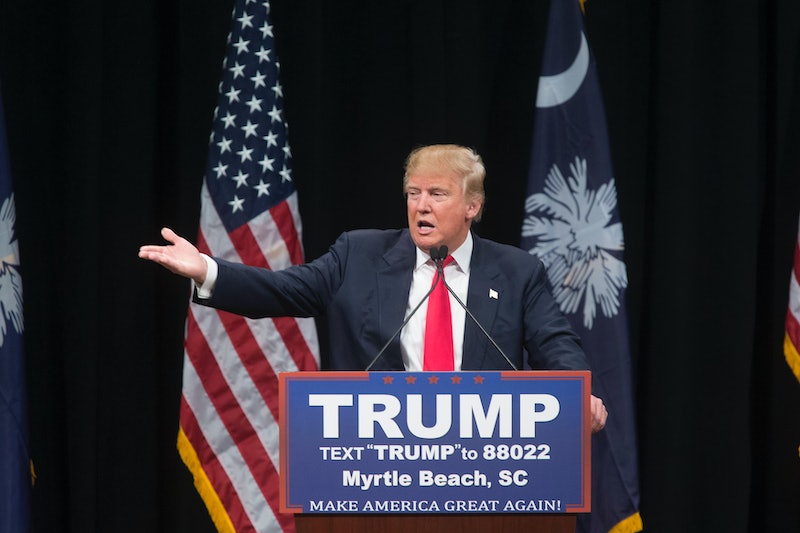 On Saturday, the Republican Party is going to get a heavy dose of reality, one way or the other. That's because their primary election in South Carolina is going down, and it figures to have massive implications for the future of the GOP nominating race ― will it be billionaire businessman Donald Trump? Conservative firebrand Ted Cruz? Youthful robot Marco Rubio? Everyone's been assuming that Trump will take it, by virtue of the polls, but what if he doesn't? What happens if Donald Trump doesn't win South Carolina?

As recently as a few days ago, this would've seemed like a possibility not worth discussing. Trump has led by double-digits in South Carolina for months, at least that's what's been indicated by the polls, and indeed, taken in total he's still looking strong ― according to Real Clear Politics, the Huffington Post, and FiveThirtyEight alike, Trump is still leading Cruz, the first runner-up, by comfortable margins. The latter, in particular, states that Trump has a 79 percent chance of winning the state.

But there's still one big, troubling red flag for Team Trump heading into Saturday: an NBC/Wall Street Journal/Marist poll taken from Feb. 15 to Feb. 17, which showed his lead shrunk to just five points, with Cruz hot on his heels. For the record, FiveThirtyEight's rankings for historical reliability give those pollsters high marks ― B+ for Marist, and A- for NBC/WSJ.

Now, you could argue that Team Trump is feeling some anxiety about this, considering the furious response the poll drew ― Trump himself called it a "fix" and a "Rupert Murdoch hit" in an interview ― but Trump is so vitriolic and thin-skinned, it's kind of futile to try to gauge his campaign in those terms.

But it's still worth mulling over: What the hell happens if Trump loses? First things first, you'd almost certainly be looking at either an ascendant Cruz standing in the winner's circle at the end of the night, flashing his classic frownsmile, or at Rubio making a seemingly impossible last-minute comeback. Either outcome would probably be welcomed by the Republican establishment as compared to Trump, although Cruz's massive personal unpopularity even within his own party makes Rubio the obviously preferred choice.

Trump, on the other hand, would suddenly be facing desperate odds to repair his flagging campaign, what with the forces of political momentum pushing against him. He was up big in Iowa and lost. He was up big in New Hampshire and won! He was up big in South Carolina and lost. That doesn't exactly read like the profile of a nominee-in-waiting. Rather, it reads like the profile of an oddity and a fluke, a sprinter already gasping for air in a long-distance run. Much less with the ever-volatile Nevada caucuses looming on the horizon ― remember, the caucus system was not kind to Trump in Iowa, and the polls there are notoriously unreliable.

Basically, if Trump loses South Carolina, it could easily end up being the toppled domino that shatters his to-this-point enchanter's grip on the Republican electorate. That doesn't mean he couldn't make a comeback further down the line ― his numbers in Florida, for example, are huge, a fact which has to rankle Jeb Bush ― but what a loss would mean is that this presidential race could start to look a little more, well, like they usually do.

But that's a reality that only persists as long as Trump wants it to, because he's got an ace-in-the-hole that could end up doing irreparable damage to the GOP coalition, in this election cycle and beyond ― he can still mount a third-party run in November, which could swing the outcome of the race one way or the other, whether or not he wins. The Ross Perot, if you will.

This is something Trump promised not to do during the very first presidential debate of the season, but if anything's been laid bare by the last several months, it's that Trump doesn't even feel burdened by the pronouncements he's made five minutes ago, let alone five months. When you additionally consider that Trump has already started trying to weasel out of his promise, which is more effort than he normally puts into it, things look bleaker still.

Wrestling control of the primary race away from him in South Carolina would be a game-changer in the race for the Republican nomination, no doubt, and it'd surely vault Cruz or Rubio into the pole position. But what should really be horrifying for anti-Trump Republicans and conservatives is that no matter who wins the Palmetto State, their chances of actually winning the White House in November still survive entirely at the pleasure of Mr. Donald J. Trump. If you'd claimed months ago that he'd become powerful enough to effectively hold the Republican Party hostage, you probably would've been laughed at. Go figure.