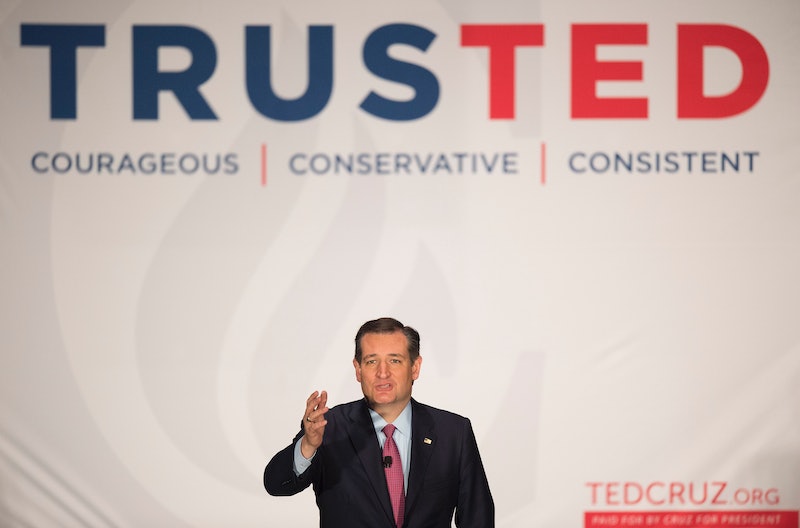 Everyone knows politics can get dirty, especially as the presidential race nears closer to the general election in November. Donald Trump has been the token bully on the Republican side, often calling his opponents mean names and publicly attacking news moderators like Megyn Kelly. Recently, though, the cutthroat attacks have centered around Ted Cruz; over the last week, Marco Rubio and Trump accused Cruz of being dishonest. Questioning Cruz's trustworthiness could be Rubio and Trump's strategy to weaken his campaign before the South Carolina primary, but it's not entirely clear. So why is everyone calling Ted Cruz a liar?

At the GOP debate in South Carolina, Rubio questioned whether Cruz could even speak Spanish. (Turns out, Cruz can indeed speak Spanish.) In fact, it was at this same debate that Rubio first called Cruz a liar, which sparked the whole name-calling controversy and encouraged Trump to join in. In the week leading up to the South Carolina primary, Cruz released ads that distorted where Rubio and Trump stand on certain conservative issues, like abortion, immigration, and healthcare.

During the Iowa caucuses, Cruz's campaign seemingly told voters that Ben Carson was dropping out of the race, and Trump claimed that unfairly helped Cruz secure his first-place finish. Later, Cruz apologized to Carson.

Rubio Defends His Record On Immigration

During an interview on Fox News Sunday, Cruz questioned Rubio's position on immigration. Specifically, Cruz said that Rubio supports "amnesty for all criminals who are here illegally," which the Texas Senator also highlighted in his recent ad that juxtaposed Rubio and Obama on immigration policy. In his interview, Cruz stated what he called "facts" about Rubio's position that weren't entirely true:

According to FactCheck.org, Cruz is lying about these claims against Rubio. Although Rubio once co-sponsored a bipartisan immigration bill, he never said he wants amnesty for all immigrants, especially criminals; rather, Rubio wants amnesty for immigrant children who were brought to the United States illegally by their parents. In an effort to defend himself, Cruz has brushed off the accusations that he is a liar by denying the allegations in an interview with "Fox and Friends" on Monday, Feb 15:

We are not in grade school where you just get to say, 'liar, liar pants on fire' and not respond to the substance. I guess Marco's team has told him, 'Well, if anyone brings up your actual record, the fact that over and over and over again you've supported amnesty, just yell liar.'

Cruz attacked Rubio on more than just immigration: In one week Cruz distorted facts about Rubio's record on same-sex marriage and on Planned Parenthood. In the end, though, Rubio had the last word at the GOP town hall hosted by CNN on Feb. 17, saying:

I said he’s been lying because if you say something that isn’t true and you say it over and over again and you know that it’s not true, there’s no other word for it.

Trump Defends His Aversion To Obamacare

Just before the Iowa caucuses, Cruz publicly accused Trump of supporting Obamacare. However, throughout the 2016 elections, Trump has remained adamantly against Obama's health care plan. During his appearance on Meet the Press at the end of January, Cruz claimed otherwise, saying that Trump's stance on healthcare is similar to the Democrats' views:

Donald Trump and Hillary Clinton and Bernie Sanders have the identical position on health care, which is they want to put the government in charge of you and your doctor.

In order to clear the air, Trump focused on Cruz's allegation at one of his speeches in New Hampshire. "I have been opposed to Obamacare since the day they conceived it," Trump said. "I've never heard a human being lie so much; he lies about everything."

Not only did Trump call Cruz a liar on Twitter, but he also sent out a press release and held a follow-up press conference on Feb. 15 that outlined all of Cruz's alleged lies. Specifically, according to Trump, Cruz has allegedly lied about where Trump stands on appointing a new Supreme Court Justice, upholding the Second Amendment, and being pro-life. Regarding health care, Trump once again clarified his staunch views on repealing it:

Cruz says I am in favor of ObamaCare, when in fact I have spoken about repealing and replacing this disaster of a system at every speech throughout my campaign and since its inception. Meanwhile, Cruz was responsible for getting Bush to put in the judge that failed to vote against ObamaCare twice.

Cruz promptly responded, saying that "ethics matter," and he dismissed the lies being thrown around. He went on to say that Rubio and Trump are "repeatedly putting forth fabrications with no evidence, no basis whatsoever, just trying to throw mud and attack." Cruz added, "The insults and the falsehoods and the fabrications have no business in politics. It is incumbent upon all of us to speak the truth."