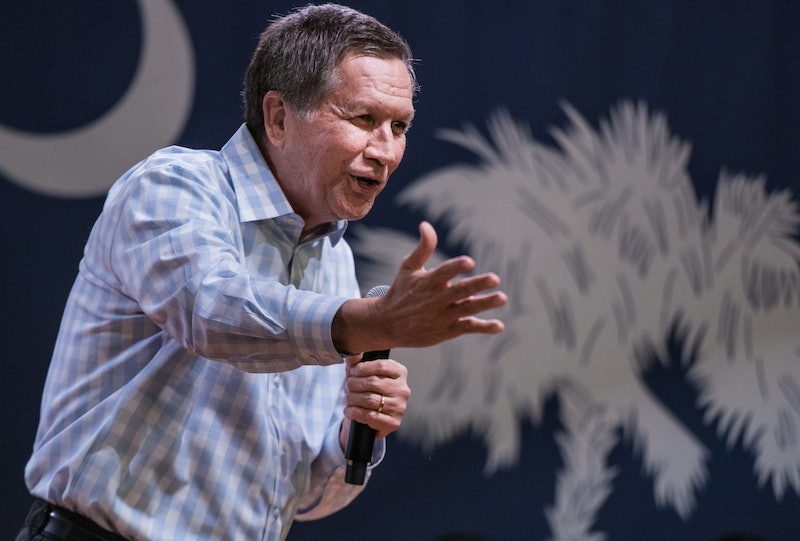 The South Carolina Republican primary is on Saturday, and so naturally, John Kasich is spending the day in... Massachusetts. That’s an unorthodox choice for a presidential candidate, because usually, you scramble to get every last vote you can in every state right before it votes. So, why isn’t John Kasich in South Carolina on the night of the primary?

It’s because, like a good poker player, the Ohio governor knows when to hold ‘em and when to fold ‘em. Kasich is a moderate Republican — at least, when compared to the rest of the field — and South Carolina Republicans are very conservative. In a recent survey, only 36 percent of Republicans in the state said they were glad the North won the Civil War, for example. It’s no surprise, then, that Kasich is polling in a distant fourth place in the state, behind Donald Trump, Ted Cruz, and Marco Rubio.

Massachusetts, on the other hand, is one of the most liberal states in the country, and Republicans there aren’t really the same animal as Republicans elsewhere else in the country. According to one study, in fact, Massachusetts Republicans are more liberal than Arkansas Democrats. It stands to reason that Kasich, who infuriated conservative Republicans when he expanded Obamacare in Ohio, would skip South Carolina to shore up his support in Massachusetts.

This isn’t the first time Kasich has done something like this. He spent the night of the Iowa caucuses campaigning in New Hampshire, and that decision paid off: Kasich finished eighth in Iowa with less than 2 percent of the vote, then pulled off a surprise second-place finish in New Hampshire a week later.

The biggest takeaway from this news, though, is that Kasich isn’t going to drop out of the race until at least March 1, when Massachusetts and 10 other states cast its votes. If Kasich recognizes that he’ll probably do very badly in South Carolina — and he can’t be blind to this fact — there’s no reason he’d be campaigning in Massachusetts unless he plans to stay in the race until the state votes.

All of this ultimately benefits Donald Trump. He’s undeniably the favorite to win the GOP nomination, but that’s only true because of how many opponents he has — Trump actually loses to both Cruz and Rubio in one-on-one match-ups, according to a recent poll. But as it stands, Rubio, Cruz, Kasich, Jeb Bush, and Ben Carson are all fracturing the anti-Trump vote, and so Trump still has a plurality of support among Republicans.

The longer this dynamic perpetuates, the more delegates Trump wins, and the more unstoppable he becomes. It’s one of the greatest ironies of this campaign: The rest of the candidates very much want to deny Trump the nomination, yet every day they stay in the race brings the GOP one step closer to nominating The Donald. Welcome to the bizarro world that is the 2016 presidential election.