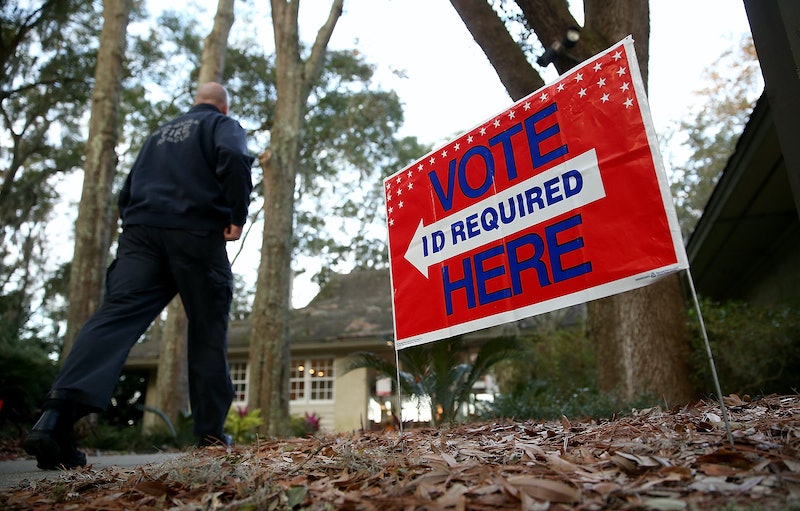 With New Hampshire and Iowa out of the way, it's time for things to get serious. Although the primary and caucus are inarguably important for drumming up support in the primaries that follow, their importance in gauging the rest of the election is, perhaps, overstated. Namely, because the two states are pretty homogenous (read: white), and don't necessarily reflect how the nation will vote. But get ready, y'all, because Saturday's South Carolina primary, particularly Lexington County, is a pretty reliable GOP bellwether.

Since the state's first primary in 1980, South Carolina has managed to predict the Republican party's eventual nominee in every year but one: In 2012, the state went to Newt Gingrich rather than Mitt Romney. But though the state as a whole might be looking to reclaim its former soothsayer status, Lexington County in particular can still boast a perfect record for rightfully picking Romney.

South Carolina had a close call in 2008, when John McCain, who became the eventual nominee, only managed to eke out a narrow win over Mike Huckabee. Many of the counties went with Huckabee, but in Lexington? Well, you can guess who they picked. But even more, the final polling numbers from the county were shockingly reflective of the state at large. In Lexington County, 33 percent of the vote went for McCain, and 29 percent to Gingrich. Across the state, McCain received 33.2 percent, and Gingrich got 29.9 percent.

So as South Carolina views itself as a litmus test for the United States, Lexington County can pretty reliably call itself the GOP bellwether for the critical state. And it looks like, as we've seen in New Hampshire and Iowa, people are ready to turn out en masse. Lexington County election officials are expecting 20,000 more votes to be cast than there were in the 2012 primary, in which 34,481 votes were tallied. That's a sizable chunk of the 277,888 county residents recorded in the 2014 census estimate.

Despite an anticipated surge in voters, early on Saturday there were few problems at Lexington polling locations save for a few "procedural errors." Gov. Nikki Haley, who endorsed Marco Rubio this week, cast her vote in the county seat this morning. I'll go ahead and let you guess who she voted for.

Still, there's no clear indication just yet how the county, or the state will go. But as the numbers roll in, keep an eye on Lexington County.