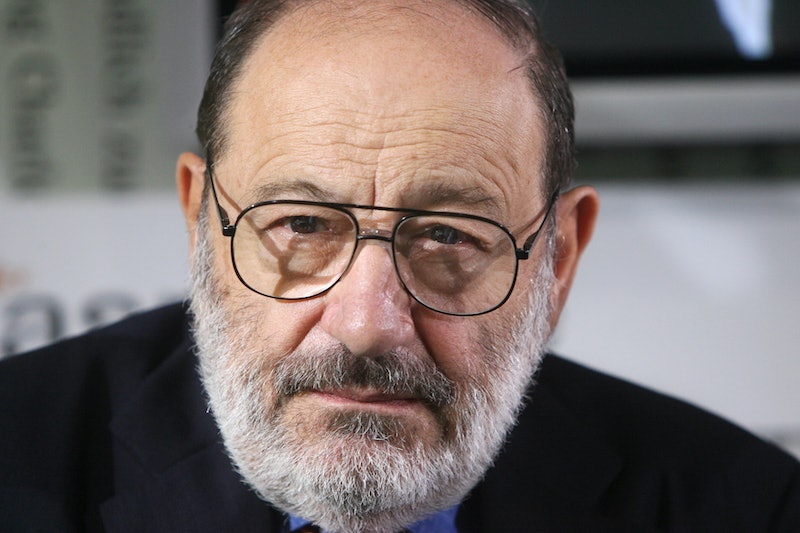 Italian philosopher and bestselling novelist Umberto Eco died Friday at 84 years old. His death was confirmed by his Italian publisher, Bompiani, according to the Italian news agency ANSA. Lawyer and long-time close friend Gianni Coscia told Italy's La Stampa that Eco had been sick with cancer for two years, but that “no one thought that his end would be so imminent.”

A professor emeritus at Milan’s University of Bologna at the time of his death, Eco was a scholar in the field of semiotics and had taught and published on the topic for decades. He did, however, still make time to pen novels, essays, and children’s books, including the groundbreaking historical murder mystery The Name of the Rose. “I am a scholar who during the weekends writes novels instead of playing golf,” Eco once said during an interview with his American publisher, Houghton Mifflin Harcourt.

His writing was an impressive hobby. Though The Name of the Rose was his debut novel, it became a wild success, selling some 10 million copies in 30 languages, and is worthy of being called a classic. The book is a difficult read (one that will earn you bragging rights, like much of Eco’s work), but as you’d expect from a philosopher, Eco’s writing is as thought-provoking as it is compelling.

The philosopher-slash-writer clearly loved his outside pursuits. “The real challenge is to make the writing process last as long as possible, always delaying the moment of the end,” he told Houghton Mifflin Harcourt. “It is so beautiful to live for many years with your story, while nobody else is knowing what are you doing, and in every moment you can pick up an idea or an image from your everyday experiences.”

Eco ultimately published seven novels, with the most recent being 2015’s Numero Zero. He also had dozens of non-fiction books to his name as well as an anthology and three children’s books. While it’s certainly sad to hear of his death, he leaves behind an impressive legacy.