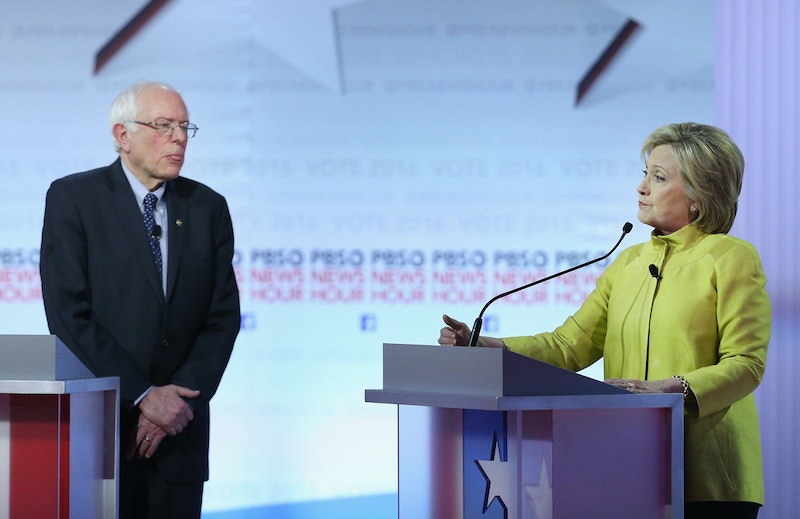 After Hillary Clinton squeaked out a win over Bernie Sanders in Iowa, a lot of Sanders supporters were shocked to hear that as many as six caucus sites were decided by a coin flip, all six of which went in Clinton's favor. That's not exactly true. Dozens of sites were decided by coin tosses, a handful of which went to Sanders, but the fact that a caucus for the nominee could actually be left up to fate was still surprising to many voters. So what happens if there is a tie in the Nevada caucuses? It's decided in a way that is absolutely, totally Nevada: with a card game.

It's looking like it'll be a tight race between Sanders and Clinton on Saturday, so the candidates better channel that Las Vegas spirit and hope to get lucky. In the event of a caucus tie, the state Democratic Party lays out a process in which a single card is drawn from a deck. The high card wins, and in the very unlikely event that the same two cards are drawn, it's determined by suit, with spades being the highest, then hearts, diamonds and, finally, clubs.

For all of you card sharks out there, it seems as if there are plenty of measures in place to prevent any kind of cheating. The party provides an unopened pack of cards that is shuffled at least seven times after the extra cards are removed, and I'm sure that there are plenty of expert shufflers in Nevada.

Unlike the primaries, a caucus site tie isn't totally unlikely. The caucus winners are determined at each site, where as primaries are rewarded at a statewide level. That means that every one of Nevada's 250 caucus sites could be subject to a tie, where as in New Hampshire the tie could've only occurred once. But we'll be less likely to see one in Nevada than we were in Iowa, which had 1,700 individual sites and only resulted in a handful of coin flips.

Heading into Saturday's caucus, a CNN poll showed that Clinton led Sanders 48 percent to 47 percent. But a weighted poll average shows from FiveThirtyEight puts Clinton at a 64 percent likelihood to take the state. That not a sure bet for any candidate just yet. That means that, quite literally, some caucus site winners could be decided by the luck of the draw.