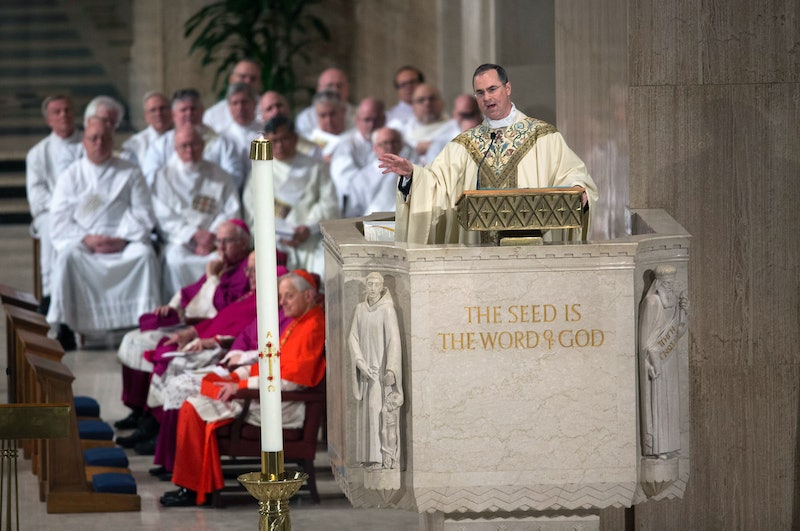 A Catholic Mass was held at the Basilica of the National Shrine of the Immaculate Conception in Washington, D.C. on Saturday for Supreme Court Justice Antonin Scalia, who died last week at age 79. The funeral Mass was celebrated by his son, who serves as a priest in the nearby Arlington Diocese. As the presiding priest, Rev. Paul Scalia delivered the homily, which also served as a eulogy for his late father. "He tried to love God and neighbor, but like the rest of us, did so imperfectly," Rev. Scalia said of his father. "We are here, then, to lend or prayers to that perfecting."

Scalia was, obviously, a devout Catholic, and was perhaps the most religious justice on the bench. Rev. Scalia emphasized that his faith influenced his legal career, noting that his faith made him a better citizen and public servant. He added that his father was "God's first," which is why he was led into public service.

Rev. Scalia also emphasized in his homily that Scalia would want his mourners to admit that he was just a Catholic looking for prayers and mercy, and to not get swept up in his legacy. "Dad himself, not surprisingly, had something to say on the matter [of funerals]," Rev. Scalia said.

Writing years ago ... he summarized quite nicely the pitfalls of funerals and why he didn’t like eulogies. He wrote, "Even when the deceased was an admirable person ... praise for his virtues can cause us to forget that we are praying for God’s inexplicable mercy to a sinner."

During the homily, Rev. Scalia praised his father's commitment to and adoration for the Catholic Church, which he had all through his life. Scalia was known for attending Latin Mass, the former tradition of the Catholic Church (though Saturday's funeral Mass was held in English). "He loved the clarity and coherence of the church’s teachings," Rev. Scalia said. "He treasured the ceremonies, especially the beauty of our ancient worship."

The homily later turned political, when Rev. Scalia addressed how his father believed religious faith was an important influence when it comes to public service — and that the nation would be better off for it. The reverend said of his father and the influence his spiritual beliefs on his career:

He knew well what a close-run thing the founding of our nation was, and he saw in that founding ... a blessing, a blessing quickly lost when faith is lost from the public square, or when we refuse to bring it there. He understood that there is no conflict between loving God and loving one’s country. ... My father understood that the deeper he went into his Catholic faith, the better the citizen and public servant he became.

"We Scalias, however, give thanks for particular blessings God bestowed," Rev. Scalia added. "God blessed dad with a love for his family. We have been thrilled to read and hear the many words of praise and admiration for him... But more important to us ... is the father that God gave us for the great adventure of family life."

But like the reverend said at the start of the homily, his father wasn't always a perfect dad. "Sure, he forgot our names at times," Rev. Scalia said to laughter. "There are nine of us."