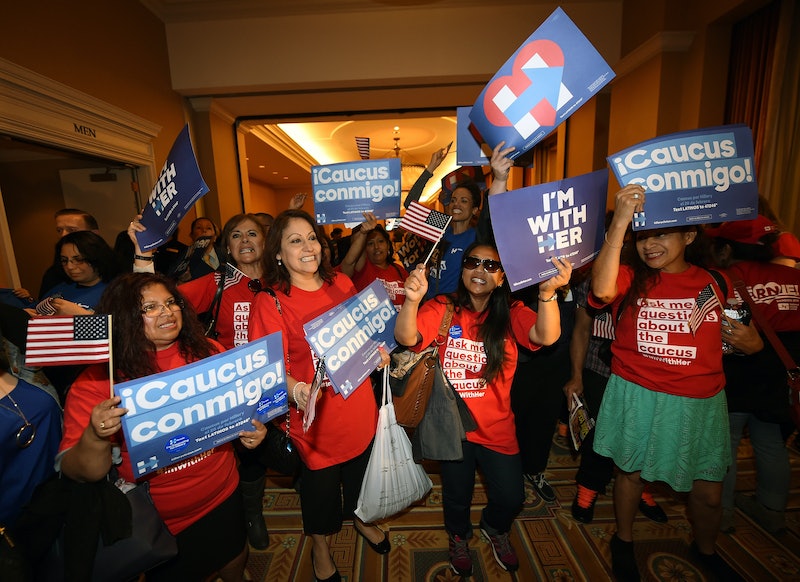 Just because it's the weekend doesn't mean that the excitement of the 2016 election has toned down. Not in the least bit. This Saturday alone, both Democrats and Republicans are avidly watching the latest caucus and primary unfold. On the left, the Nevada caucus has been full of surprises with dizzying voter turnout and an incredibly close race that had frontrunner Hillary Clinton eking out a victory against Vermont Sen. Bernie Sanders. Caucuses are especially unique events on their own and the weekend event provided a surprising amount of comedic fodder. Democratic Nevada Caucus memes and jokes were aplenty as those in the Silver State and beyond made their voices heard.

Solidarity truly means joking together about the stranger parts of the Nevada caucus, such as the ritual of picking a card to determine a tiebreaker. Rather than coming down to a coin flip, as with what unfolded over the course of the heated Iowa caucus, it's the luck of the draw that determines the victor. Unopened decks of cards were delivered to caucus locations where a delegate was set to be awarded and officials were instructed to shuffle the cards seven times before picking one card per candidate. Needless to say, this clever nod to the casino-heavy state made for some pretty excellent memes and jokes, as did the Nevada caucus in general.

Though the Democratic Nevada Caucus may have been called quickly, even its candidate speeches were not without their more humorous moments. Clinton supporters tweeted their exuberance in a variety of ways, drawing from sketch comedy shows like Saturday Night Live as well as footage of HRC herself. On the Sanders side, supporters were worried the candidate was feeling the Bern a little too much while delivering his eloquent concession speech at the Henderson Pavilion.

Essentially facing the sun, Sanders spoke of his close race against Clinton while attempting to shield his eyes from the unforgiving Nevada horizon. Viewers took notice and had some pretty hilarious memes to show for their efforts. Political junkies are only just getting started this Saturday evening. The Democratic Nevada Caucus essentially served as their warmup, albeit a quick one. The event wrapped up just in time for polls to close in South Carolina as votes began to be counted for the Republican Primary in the Palmetto State. The memes and jokes undoubtedly won't stop until well after the GOP winner delivers their victory speech.