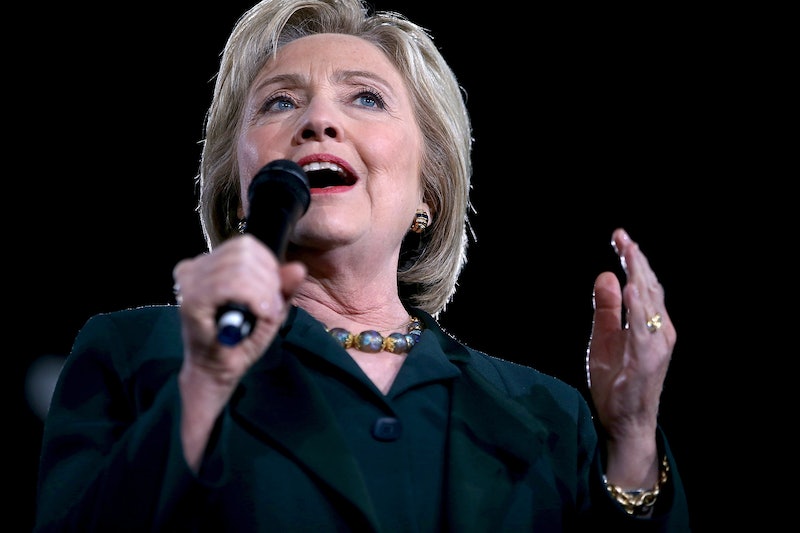 It's still too early to know for sure exactly how many Latino voters caucused in Nevada on Saturday and how they voted. But exit polls from the Silver State suggest that Bernie Sanders may have outperformed Hillary Clinton among Latino voters, something that would underscore the downfall of her former stronghold on the minority vote. Though exit polls certainly aren't perfect, the results that show Clinton losing the Latino vote would make some sense in light of the most recent polls.

According to NBC News, Latino voters comprise about 17 percent of Nevada's electorate. Clinton enjoyed a solid lead among Hispanic voters in January, but the weeks leading up to Saturday's caucuses saw that lead deteriorate rapidly, according to polls conducted by NBC News and Survey Monkey. She was 20 points ahead of Sanders with this demographic up until the last week of January; in the first week of February, that was down to about 10 points. Finally, in the second week of February, polling saw that lead shrink to a measly 3 points.

Clinton's possible loss among Hispanic voters in Nevada in 2016 is even more noteworthy when put in context of her performance in 2008. The Pew Hispanic Center found that, nationally, Clinton won the Hispanic vote two-to-one against then-Sen. Barack Obama. She got 64 percent of Latino votes in Nevada in 2008, according to exit polls analyzed by Pew, to Obama's 26 percent. Pew reported that, in 16 of the 19 states with exit poll data in 2008, there was a significant increase in Hispanic voter turnout that year.

Why were Latinos so excited about Clinton? Clearly, she had greater name recognition than Obama — as she has over Sanders — but there's more to it, reported BuzzFeed's Adrian Carrasquillo. He explained that Clinton has a well-established network of prominent Latino activists and leaders in her corner. Some of those relationships go back as far as 1972, when she worked with union leader Frank Garcia to increase Latino voter registration in Texas during George McGovern's presidential campaign. The network advantage, combined with her strong showing among Hispanic voters in 2008, was plenty of reason for Clinton's campaign to expect Latinos to help her clinch the Democratic nomination in 2016. Saturday's results may temper, if not dash, that expectation.

We should note that exit polls aren't really designed to give the most accurate information concerning voting behavior broken down by race, and they have been wrong in the past, reported Vox's Dara Lind. A New York Times analysis did find that Clinton outperformed Sanders in areas with high Hispanic populations, which would suggest that the exit poll results that show him in the lead among Latinos may have been a bit off — but probably not much, since the Times analysis showed Clinton with only a very slight lead over Sanders in highly Hispanic areas, barely more than she had over him in areas with fewer Hispanics.

Clinton's lack of a strong showing among Latino voters in Nevada may not bode well for her campaign's "Southern firewall" strategy, which put a lot of weight on the minority vote going into Super Tuesday. However, Clinton still has the vast majority of the African American vote; whether Sanders sees a rapid rise in his numbers among African American voters as he did with Latinos is something to keep a close eye on going forward.