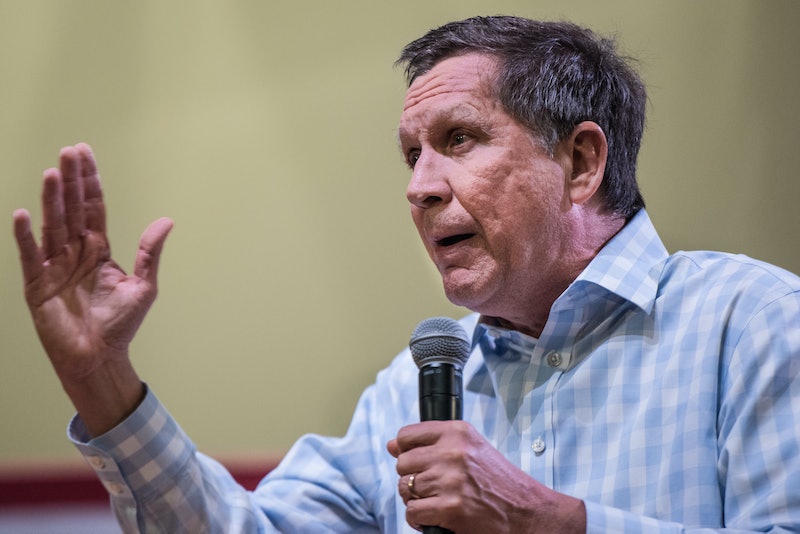 After the results from Saturday's Republican South Carolina primary, many are now wondering if John Kasich will drop out of the race for the GOP nomination. It's not just that the Ohio governor failed to beat Donald Trump; he failed to even finish in the top three. And, let's remember, there are only six — actually, make that five — of them left now. While Kasich's struggling (to put it mildly) campaign for the White House was certainly revitalized by his second place finish in New Hampshire, after falling to Trump, Marco Rubio, and Ted Cruz in the Palmetto State, the results raise questions about whether Kasich will continue to seek the Republican nomination.

Already, Jeb Bush announced he was suspending his campaign after his disappointing finish in the Palmetto State. In fact, at this time of writing, Bush is doing better than Kasich in South Carolina, according to CNN. However, Kasich doesn't appear to be following in his fellow (former) governor's footsteps — at least for now. Kasich's chief strategist, John Weaver, boasted in a press release that "Tonight it became a four-person race for the nomination." He also tweeted that Kasich was in the "Final Four" after South Carolina's results and made a dig at Jeb!, reminding voters that Kasich was the "Only Gov" left.

For now, it looks like Kasich isn't dropping out of the Republican race for the nomination — but it says something about the state of his campaign to be giddy about such a lackluster finish.