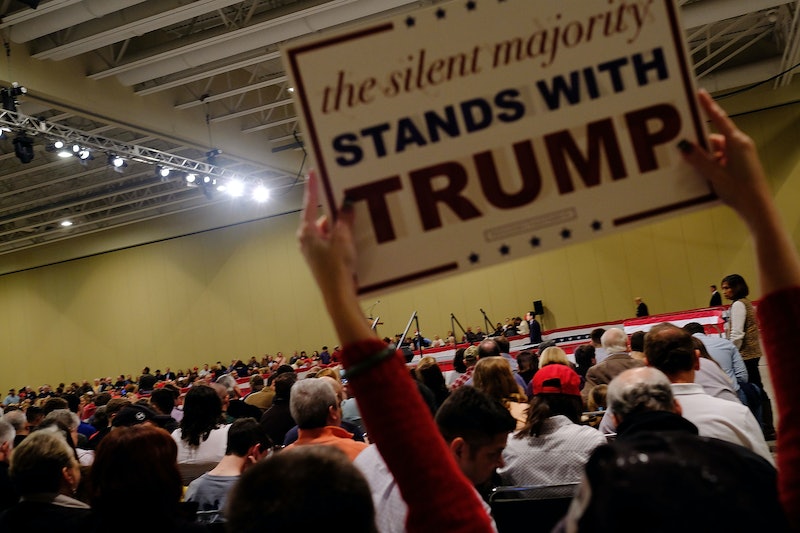 Donald Trump has reigned victorious in Saturday's South Carolina primary race, following his win in New Hampshire, which could mean some important prospects for him at the Republican National Convention. After all, wins in these two states often predict the GOP presidential nominee. This means things are looking up for The Donald, who hasn't really even seemed to acknowledge a time of things looking down, but I digress. Although he came in a close second to Ted Cruz (24.3 percent for Trump to Cruz's 27.6 percent) in the Iowa caucuses on Feb. 1, a bigger predictor of momentum — more than the first or second state's vote, individually — is the pattern that begins to form as more states begin to cast their votes.

Though Trump's South Carolina victory was narrower than anticipated, no Republican candidate in history who has won both New Hampshire and South Carolina has not gotten the nomination from the GOP. Consider that: Trump is currently the closest to winning the Republican presidential nomination, and he is also a non-establishment candidate in a field of many traditional politicians. Since its inception in 1980, the South Carolina Republican primary alone has predicted nearly every Republican nominee for president, except for the year 2012, when Newt Gingrich beat out Mitt Romney.

On the other hand, the New Hampshire primary has served as a benchmark to the White House since 1952, though it was founded in 1916, and has often predicted which Republican would take the GOP nomination. The exceptions to this rule are in 1964, when Ambassador Henry Cabot Lodge, Jr. defeated Sen. Barry M. Goldwater 35.54 percent to 22.28 percent, as well as 1996, when Pat Buchanan beat Bob Dole 27.26 percent to Dole's 26.23 percent, and finally in 2000, when Sen. John McCain triumphed over George W. Bush 48.59 percent to 30.39 percent.

Combined, however, 1996, 2000, and 2012 are the only three terms since South Carolina's primary was born that winning Republican candidates did not match up. However, when they have matched up with what happened in New Hampshire, that candidate has become the Republican nominee. This has proven true in the cases of Ronald Reagan, George H. W. Bush, George W. Bush, and John McCain. In other words, wins in these two states are almost a recipe for the White House.

Because there are no examples of a Republican hopeful winning both primaries and losing the presidential nomination, the stakes are now higher for Trump, who is perhaps beholden to a pattern instituted before he ever seriously considered running for president. Whether this will manifest as an opportunity to face off against the Democratic candidate is something voters will see unfold in the coming months.