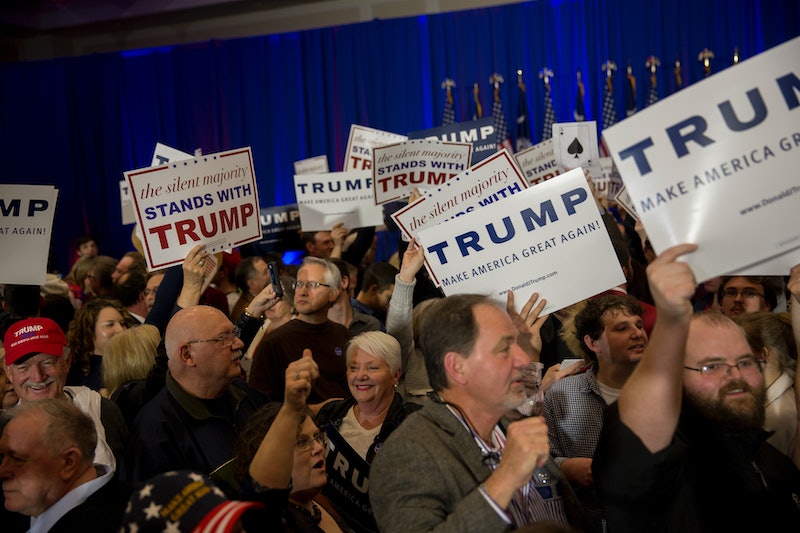 Well, it's official: after months and months of wondering whether the belligerent billionaire businessman could actually get it done, Donald Trump has won the South Carolina primary. And as the news washed over the crowd at his campaign headquarters, it provoked an predictably excited response: here's what Trump's HQ looks like right now, with the candidate's victory speech sure to be raucous.

Trump was the clear frontrunner in the state for months, and although it was a slightly tighter affair that the polls suggested just a week ago, it ended up being a solid and undeniable win ― Trump dusted both of the closest runners-up, Marco Rubio and Ted Cruz, by a double-digit margin. The other three candidates in the race, Jeb Bush, John Kasich, and Ben Carson all finished well in the back, effectively affirming once and for all that this is a three-person race going forward.

Of course, after the votes are cast and the winner is chosen, the expectations game begins, with the respective campaigns trying to spin exactly why it was actually a great night for them. Trump and the supporters and staff at his headquarters don't have to pretend to be happy, though ― they get to drink in the win, even as the conservative establishment's loathing builds by the day.

Trump's speech was every bit the triumphant event you would've expected ― it was introduced by chants of "U-S-A! U-S-A!" from the assembled crowd ― but Trump wasn't exactly breathing fire like he sometimes does. Rather, it was notable as much for Trump's slightly muted, relieved demeanor, and for the rare moment of congeniality he paid his chief rivals, Marco Rubio and Ted Cruz.

He congratulated the pair for running successful campaigns, although he nonetheless bested both of them by more than ten points. Notably, one name that did not cross his lips was his longtime, transparently loathed rival Jeb Bush, who dropped out of the race following a disappointing fourth place finish. Needless to say, this was a big night for Team Trump, and it figures to propel him on to yet more once-unthinkable successes.