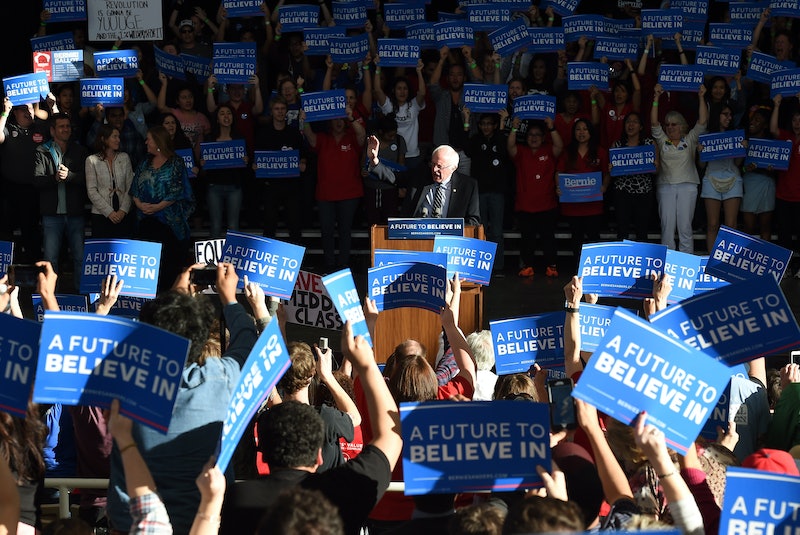 On Saturday, Democratic voters in Nevada participated in their party's caucus to help choose their presidential nominee. Former Secretary of State Hillary Clinton beat out Vermont Sen. Bernie Sanders to win her second caucus of the race, but Sanders' campaign may have bigger concerns than the Nevada loss. At one Las Vegas caucus site, things seemed to turn ugly as civil rights leader Dolores Huerta claimed that Sanders' supporters chanted "English only!" as she tried to offer a Spanish-language translation.

Huerta herself spoke about the jeering to The Huffington Post. She explained that she had been trying to help Spanish-speaking voters through the caucus process at Harrah's, a Las Vegas casino that also served as a caucus site, when Sanders' supporters began to demand that she stop speaking Spanish.

"Shouting 'English-only' — that is completely against the spirit of everything that we're working for," Huerta told the Huffington Post, adding, "To deprive these voters at this crucial time of having a translation of what was going on — this is something they need to know what's taking place." Actress America Ferrera, who was also at the casino caucus site, tweeted about the chanting. Both Huerta and Ferrera have supported Clinton's presidential campaign, and both have also worked to engage more Latino voters in the political process.

Huerta also spoke with progressive news outlet ThinkProgress following the incident. She explained that the officials running the caucus had asked for someone to come up on stage to translate, and Huerta said she was the first person who made her way up there. "Then the Bernie people started yelling no, no, no," she said. "One of their people came up, and I suggested we both translate. But the moderator decided we would have no translation."

Sanders campaign has yet to comment on the allegations. Video of the alleged incident was reportedly posted on Facebook briefly, but then deleted, according to news site Latino Rebels.

Huerta has been critical of Sanders during the campaign, particularly of his stance on immigration. Recently, she has cited his vote against an immigration reform bill in 2007. According to The New York Times, Sanders came out against the immigration bill at the time because it didn't support the rights of American workers.

Huerta has been an activist for both Latinos and American workers throughout much of her life — and she's no stranger to controversy and experiencing backlash for her actions. She has been arrested more than 20 times for partaking in activist behavior. Throughout her activism, Huerta has worked to be a voice for laborers, immigrants, and women. She co-founded the United Farm Workers of America, the largest union of its kind. She currently serves on several advocacy boards for feminist groups, workers' groups, and the like. Additionally, she serves as the president of the Dolores Huerta Foundation, which seeks to provide leadership development opportunities for community organizers.

For all of her work, Huerta has won an impressive laundry list of awards and recognition. In 1998, she was among the first class of recipients of the Eleanor Roosevelt Award for Human Rights. Interestingly enough, Clinton's husband, former President Bill Clinton, awarded Huerta with this honor. In 2012, she was awarded a Presidential Medal of Freedom by President Barack Obama.

The caucus process, at least the one used in Nevada on Saturday, requires voters to stand in a certain area of the room based on which candidate they'd like to support. The process also allows people to speak to each other to try to sway voters to support their preferred candidate. Clinton may not have needed the Spanish-language translation at this particular caucus site to win the state, but there's no doubt that the translation Huerta wanted to provide probably could have benefitted a significant amount of voters.