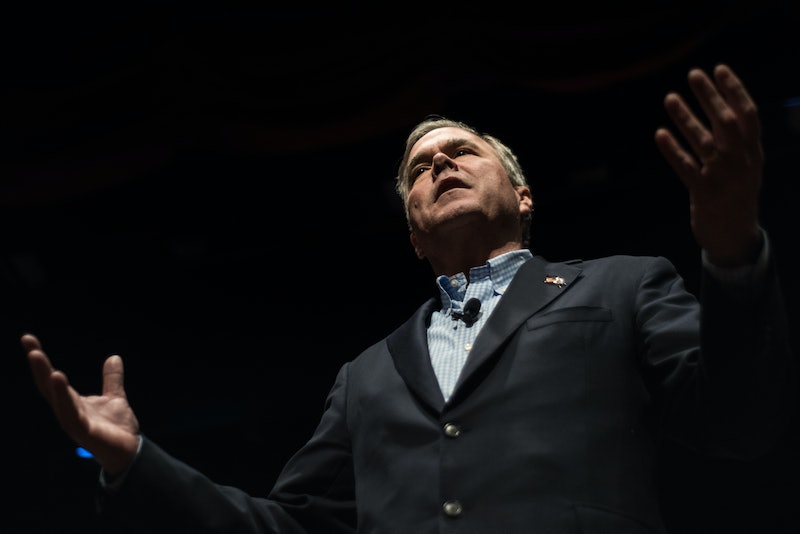 On Saturday, as follow-up results from the South Carolina primary following Donald Trump's victory began to trickle in, CNN announced that Jeb Bush was suspending his campaign. Moments later, in a speech from South Carolina, Bush confirmed the report. "Tonight I am suspending my campaign," he told crowds in South Carolina. In spite of high expectations and buzz surrounding his campaign in the early months — and despite spending millions more than frontrunner Donald Trump — Bush never managed to crack the top three GOP candidates for the nomination.

"I’m proud of the campaign we won to unify our country, and to advocate conservative solutions... But the people of Iowa, New Hampshire and South Carolina have spoken," he said. Bush went on to explain, "I stood my ground, refusing to bend to the political winds."

Bush had been expected to drop out at some point before Super Tuesday. After his non-top-three finishes in New Hampshire and Iowa, his campaign looked on the verge of giving up, and South Carolina appeared to be the last straw.

Regardless, Bush's dropping out — and Trump's victory by a wide margin — marks a turning point in the race. One year ago, Trump was viewed as the 2016 wild card and branded a joke (at best) by the mainstream media. Bush had been thought of as the frontrunner. Now, Bush dropping out mean the most initially plausible GOP candidate for president has disappeared, and with John Kasich and Ben Carson polling poorly, it's all come down to Cruz, Rubio, and of course Trump.

In his own speech, Marco Rubio said of Bush, "He was the greatest governor in the history of Florida, and I pray his service to our country has not ended."