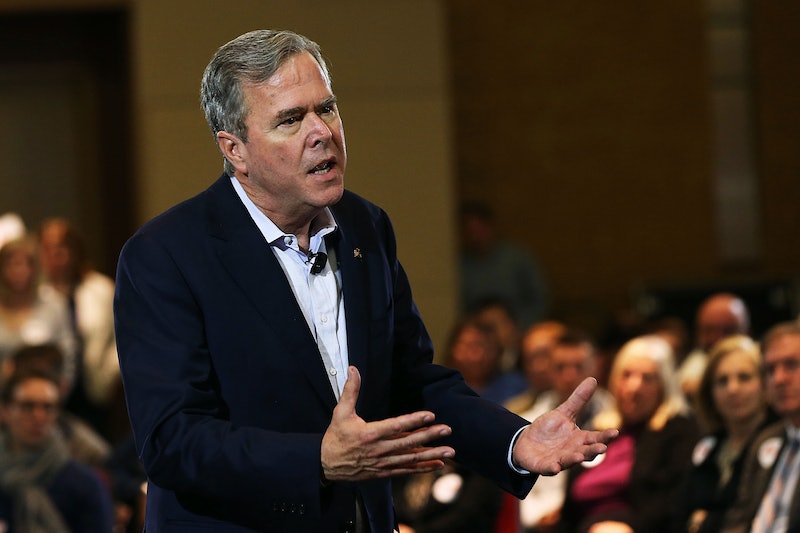 Immediately after the South Carolina GOP primary Saturday, Jeb Bush announced that he would suspend his 2016 presidential campaign. Though the results weren't yet finalized, Donald Trump was named the primary winner Saturday night, and Bush didn't even place in the top three. If you didn't catch Bush's full announcement, there's one line from Bush's dropping out speech you need to know about.

Realizing that his bid for the White House was coming to an end, Bush got a bit emotional while telling his supporters that he was suspending. Talking about his campaign, the Republican said, "I stood my ground, refusing to bend to the political winds," choking up as soon as he got the words out. This important line shows that Bush was proud of the 2016 campaign he led, while also making a dig at the five GOP candidates who remain in the race and criticizing the overall political climate.

Bush failed to do well in Iowa and New Hampshire ahead of the South Carolina primary, but he didn't let the disappointing performances put a damper on how he felt about his campaign. He stayed true to his beliefs and agendas, regardless of what the other GOP candidates threw his way or promised America.

While Bush's speech was mostly gracious and humble, this line implies that other candidates haven't stood their ground and have been influenced by the incredibly divisive and extreme political climate surrounding this year's election. He enthusiastically backed his party by saying that America needs a conservative leader, but he doesn't see eye to eye with the Republicans still in the race (made clear by their arguments in recent GOP debates). Obviously, Bush would have preferred to be the nominee himself, and he couldn't leave the race without slyly implying that his opponents are fickle.

Trump's previous support of Democratic politicians —including his now-rival Hillary Clinton — has been an area of criticism for the GOP frontrunner. Bush could have been alluding to Trump's former liberal leanings, including the fact that Trump admittedly used to be pro-choice. In the last GOP debate, Bush and Trump got into multiple loud squabbles about Russia, 9/11, and the Bush family.

Bush put a lot of time and energy into this campaign, raising $155.6 million in donations and super PAC funding in 2015. The crowd of supporters cheered him on in solidarity as he seemed to keep back tears after delivering that line, though he was able to regain his composure quickly and continue on.