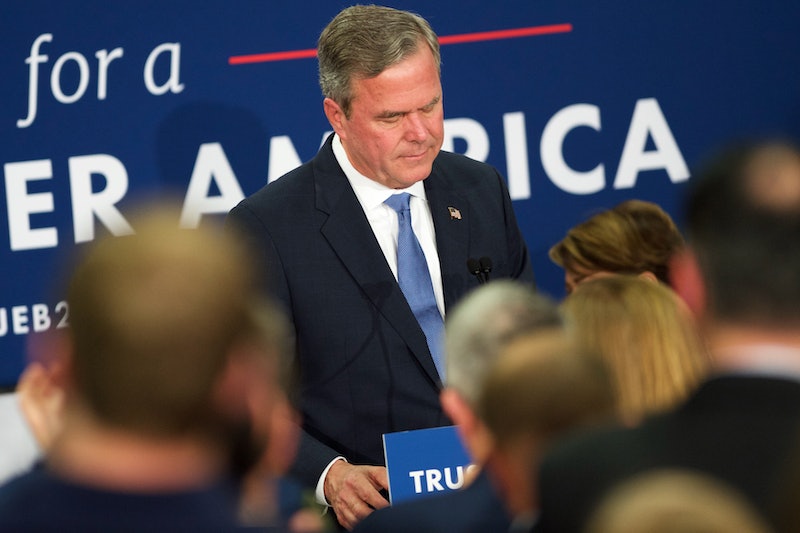 On Saturday night, with the polls closed in South Carolina and the winner confirmed ― billionaire businessman Donald Trump, with a top-tier of Trump, Ted Cruz, and Marco Rubio ― the first of the lagging others finally decided to give up the game. That's right: Trump won't have Jeb Bush to kick around anymore. The former Florida governor suspended his campaign in an emotional speech to his supporters, with his wife, Columba, by his side fighting back tears. Here are some reactions to Jeb Bush dropping out that will almost make you miss the guy.

Of course, there's one person who won't miss him, and that's his chief foil and rival in the race, the now iron-clad frontrunner: Trump! While Jeb's concession and withdrawal speech was pretty widely positively received, broadly hailed as a dignified and respectable exit from a candidacy that he was simply never cut out for, you just know Trump is reveling in the spotlight and in Bush's departure. If there's any downside to this situation for him, it's that he's lost one of his most frequent verbal punching bags. Here are some of the various reactions, both positive and negative, following Bush's exit on Saturday night.

Jeb's announcement that he was suspending his campaign was introduced by South Carolina senator Lindsey Graham, himself a former candidate in the race, and one of Bush's increasingly visible surrogates as Saturday approached ― Graham's tone immediately signaled to the room that it was not going to be a happy moment.

Graham gave Bush a warm sendoff, referring to him as his "friend for life" before giving way for the man himself to speak. Bush's speech was nothing if not melancholy, and at one point it seemed as though he was choking up before the crowd swooped in with some raucous applause to cover the moment.

Of course, even people the internet views sympathetically aren't immune from some good-natured ribbing. And considering that Bush was and is a major party politician, plenty of people have attitudes towards him that are a bit more on the mocking side. Although let's be honest ― the moment he choked on his words after announcing he was suspending his campaign, you knew he'd be the target of a Crying Jordan meme.

It'll be downright fascinating to see how the Republican race shapes up in Bush's absence. With the field of credible contenders narrowed to just three, the candidates are going to have to pay some serious through to who to attack, and when. But as a parting thought on a hugely consequential Saturday night in American history, spare a thought for the vanquished ― good night, sweet Jeb.