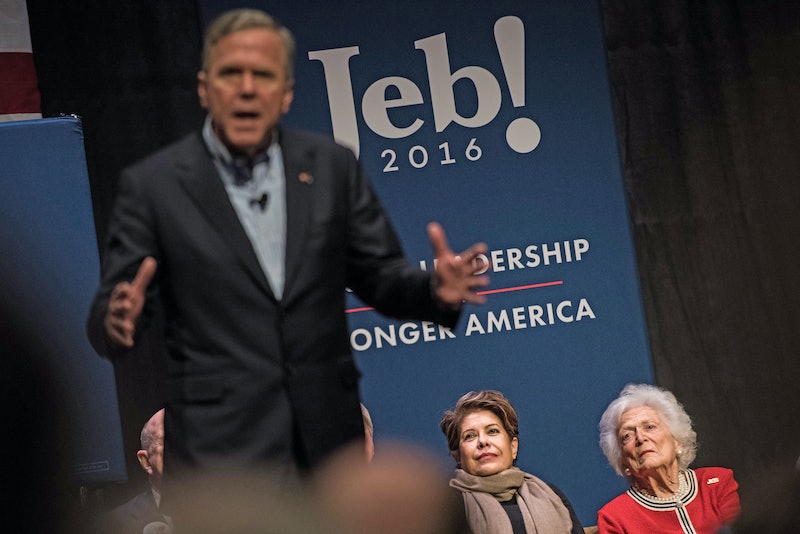 As results poured in from South Carolina's Republican primary election on Saturday, it is unlikely that many people were surprised to hear that Gov. Jeb Bush suspended his campaign amid yet another disappointing showing. Bush's campaign struggled through Iowa and New Hampshire with consistently low poll numbers and lackluster performances in the nation's first contests, and it appears that the third blow was sufficient to knock Bush down. He scored in the single digits during Saturday's contest, with Donald Trump earning a strong win. With typical speed and relentlessness, the Twitterverse was quick to react to Bush's campaign suspension.

A bit of humor may help soften the blow for those sympathetic toward or enthusiastic about Bush's campaign. Though he sometimes came across as whiny during the debates — particularly when telling Donald Trump to leave his mom and brother alone — for the most part, Bush was a pretty stand-up guy, staying above the fray of mudslinging. More soft-spoken than most of his contenders, his comparative mild-mannered nature will be a component some of us will miss. Bush persevered through some pretty miserable times up until now, and he deserves respect for that. So, with due props given, let's proceed to some funny memes about Jeb!, exclamation point included.

In the week leading up to the Republican South Carolina primary, Bush caught some flak for a weirdo tweet of a gun emblazened with his name along with the caption, "America." Here's the original:

Twitter user KeyBoardKilla seems to think President Obama is quite pleased with the news of Bush's campaign suspension.

Ouchhhhh, and then there's the inevitable burn about the Bush family presidential laurels, to which Jeb was not able to contribute.

There are lots of things people could say about Jeb Bush. That he's the smoothest character around is not one of them.

It's easy to forget that Bush was flying high very early on in this race. It did not last long.

How was Bush able to raise so much money...and do so poorly?

Nihilist Arby's always bums everyone out.

We can safely bet that Bush really, really wishes this was not caught on camera.

This face really says it all.