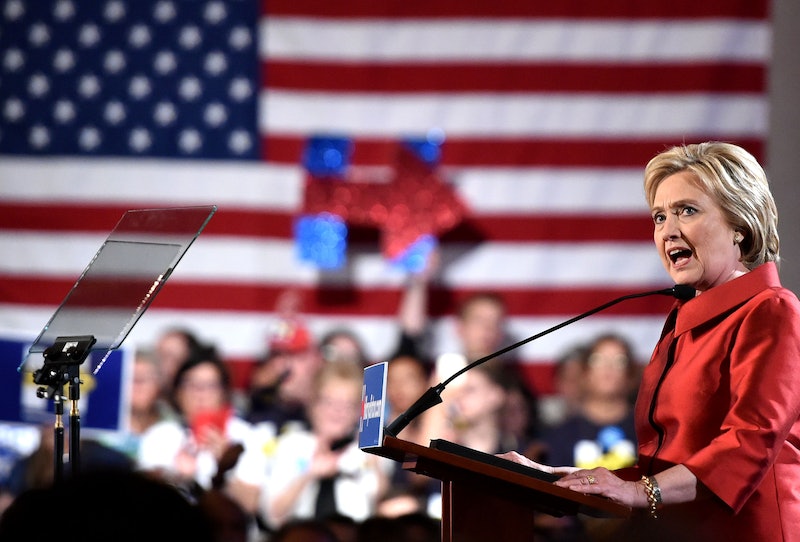 Claiming Nevada as a victory, former Secretary of State Hillary Clinton addressed an energized crowd of supporters Saturday night after eking out a narrow win in the day's caucus. Playing up her image as the pragmatist alternative to Bernie Sanders and his ambitious (unrealistically so, many critics would say) plans, Clinton acknowledged that American voters are angry, and rightfully so. However, Clinton spent her victory speech encouraging "real solutions," and she continued the refrain that the United States is not a "single issue" country.

After citing the devastated communities of Flint and Ferguson, along with those living in "coal country and Indian country," Clinton said: "The truth is, we aren't a single issue country. We need more than a plan for the big banks. The middle class needs a raise. And we need more jobs. We need jobs that pay well and can't be outsourced – jobs that provide dignity and a future." She followed up with a push for increasing sustainable energy production, proclaiming to the crowd of desert dwellers that under a Clinton presidency, the "clean energy superpower of the 21st century" would be the United States, not Germany or China. Nevada is likely to be a major beneficiary of Clinton's sustainable energy generation platform; she intends to increase installed solar capacity nationwide to 500 million panels.

Clinton continued on, calling on the men and women of corporate America to make sure that they play by the rules and claiming that a Clinton presidency would support companies who are doing the right things: "If you invest in your workers, contribute to your communities, help build a better America, we're going to stand with you. We're going to go into the future together." Clinton added: "We need more jobs. We need more opportunity."

Standing together was a clear theme throughout the speech. Clinton used the word "together" a total of eight times during her eleven and a half minute speech; "community" or "communities" was used seven times. She also used this opportunity to announce that her campaign would be introducing new ways for Americans to get involved in community service during the upcoming week. She specifically vowed: "We will propose new ways for more Americans to get involved in national service and give back to our communities because every one of us has a role to play in building the future we want."

She also used the speech to announce a plan that would ensure indebted college students and graduates would have a way to refinance their debt obligations, saying she has "a plan to cut your interest rates and cap payments so you never have to pay more than you can afford."

While Clinton did deliver a victory speech and not a concession speech in Nevada, the results out of the Silver State are likely to be perceived as way too close for comfort for those in her camp preparing strategy for Super Tuesday and beyond.