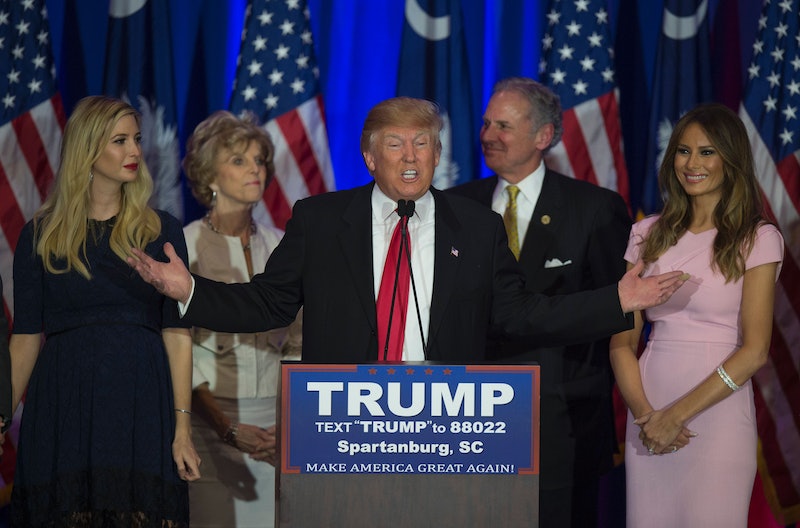 On Saturday, Donald Trump had a strong victory in the GOP South Carolina primary with about 33 percent of the vote. Ted Cruz and Marco Rubio were still in a close race for second place Saturday night, but neither was set to receive many delegates from the state because of how many South Carolina delegates Trump won. Failing to make the top three once again, Jeb Bush suspended his presidential campaign not long after Trump's victory was announced.

The way South Carolina determines who wins its delegates is pretty tricky, so here's the gist — whoever gets the most votes in the state automatically receives 29 of the 50 total delegates. After that, three delegates are awarded to the winner of each congressional district, of which there are seven.

Because Trump won the primary across the whole state, he was given those 29 delegates right off the bat. Late Saturday evening, 98 percent of the vote results were in, and The Hill reported that Trump had won all but two counties. Congressional districts are made up of multiple counties, so losing two counties doesn't necessarily mean Trump lost two congressional districts; however, he might have. In the counties that Trump lost (two of the state's three most populous), Rubio had the most support.

Without knowing the fate of those two congressional districts, Trump won at least 44 of the 50 delegates. Since there's a chance he could still win the two districts not yet finalized, he could walk away with all 50 of South Carolina's delegates. Despite losing two counties to Rubio, he still had a lead of at least two points in every district.

Before South Carolina, Trump had a total of 17 delegates, while Cruz had 11 and Rubio had 10. His victory Saturday night will give him a substantial lead over his opponents, especially considering how important the first southern primary is historically for GOP candidates' success. The fact that Trump beat out Cruz in areas of the state with high numbers of evangelical voters shows that his reach is expanding and Cruz's (his long-time runner-up) is dwindling.