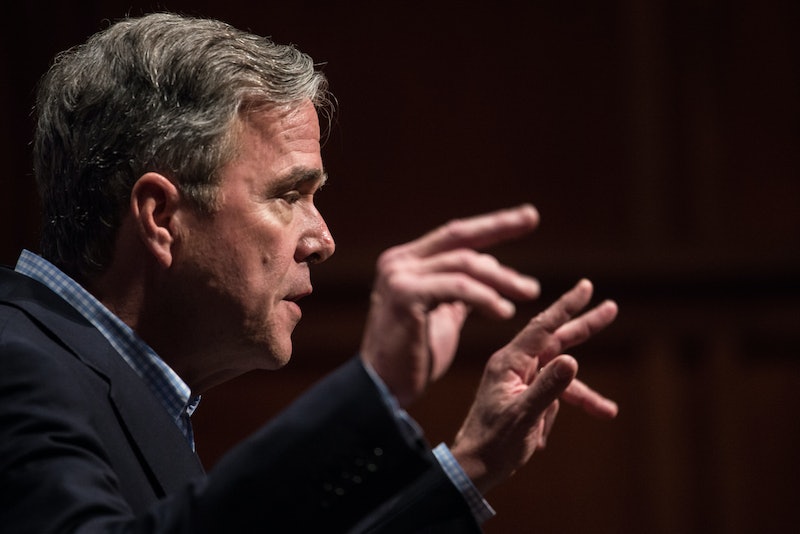 Former Florida Gov. Jeb Bush dropped out of the 2016 race for the GOP nomination after garnering a measly 8 percent of the vote in the South Carolina primary on Saturday. Palmetto State voters resoundingly rejected the notion of a third Bush presidency (this election cycle at least) despite his campaign's deluge of media buys over the past few weeks. Exactly how much the Bush campaign dropped on the 2016 race won't be known until the filings for the Federal Election Commission reports come through for the first quarter of this year, however there are a few other ways to measure just how much money was spent by Jeb Bush to lose the 2016 nomination.

According to reporting in the Latin Post, Jeb had spent a total of $58.8 million dollars since the launch of his campaign on Jun. 15 of last year. The vast majority of that sum, or $55.9 million, came from his "Right to Rise" SuperPAC (phrasing, anyone?) while $2.9 million came from the main campaign itself. The large discrepancy between SuperPAC contributions and spending from the official campaign illustrates just how reliant the Bush campaign was on the contributions of an increasingly small pool of loyal deep-pocketed donors who have been patiently waiting for a signal to jump ship.

Bush outspent all of his GOP rivals in the run-up to the New Hampshire primary; Patrick Garvin and the staff at The Boston Globe tabulated that Bush's campaign spent $3.52 million in media buys throughout the New Hampshire/Boston market for the months of December, January, and February, second only to Florida Senator Marco Rubio's approximately $4.12 million in ad buys during the same time period. In South Carolina, Bush spent $10.3 million on ads before ultimately calling it quits.

Breaking it down in terms of spending per vote gained is probably the best metric available if you're looking to understand just how much of a lost cause the former Florida governor's bid for the 2016 GOP nomination actually was. In Iowa, Bush spent a whopping $2,800 per vote. In New Hampshire, the campaign spent $1,150 per vote: a steal compared to Iowa.

By dropping out of the race after not one, but two fourth-place finishes after such lavish expenditures, perhaps Jeb will still go on to earn a respected perch in the annals of our political history: as the true financial conservative of his family.