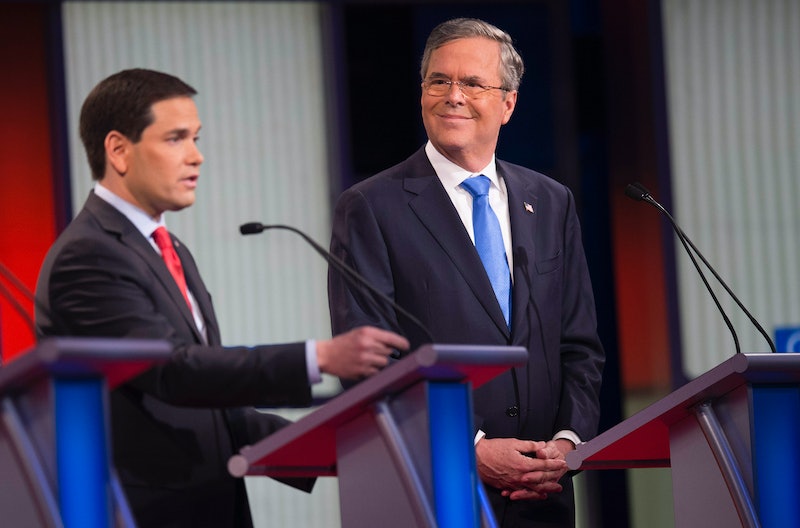 On Saturday, the day that establishment conservatives everywhere had likely expected but didn't want finally arrived: Former Florida Gov. Jeb Bush ended his campaign for president after failing to make a strong showing in any of the early primary states. He finished fourth in Saturday's GOP primary in South Carolina, and he fell more than 100,000 votes short of third place. Now that it's official, this latest departure from the race begs the question, who will Jeb Bush endorse for the GOP nomination?

There's no certain answer to this question — at least, not yet. In his concession speech, Bush remarked that he wanted to respect the wishes of the voters in early primary states and that he was looking forward to spending time with his wife now that his campaign has ended. He made no indication of whom he would be supporting as the race moves forward. If his past is any indication, though, there seems to be only one logical choice for Bush's endorsement.

It's no secret that Bush and Florida Sen. Marco Rubio go way back. After all, they hail from the same state. When Bush made his campaign announcement back in June (after Rubio had already entered the race), Rubio welcomed Bush to the campaign trail, calling the former governor his "friend." Now, their friendship could turn into a powerful boost for Rubio's campaign to the White House.

It wouldn't be the first time that Bush helped Rubio on the campaign trail. During Rubio's very first campaign, when he ran for a spot on the West Miami City Commission, Rubio received a small campaign donation from Bush, of which Rubio was immensely proud. More recently, Bush supported Rubio's first Senate campaign in 2010.

Should he choose to endorse his longtime friend, Bush's support could come at an important moment for Rubio. Rubio has recorded impressive finishes in both Iowa and South Carolina, but he has yet to win a state's primary. It's very unlikely that a candidate would win the nomination without winning a single state. That being said, it's unclear which state Rubio is likely to outright win at this point.

In South Carolina, Donald Trump won the Republican vote by roughly 70,000 votes. Bush received roughly 60,000 votes. Thus, even if every Bush voter switches his or her support to Rubio from here on out, it's not clear that Bush's endorsement would be enough for Rubio to break through the lead that Trump has created.

If Bush doesn't support Rubio, my next guess would be Ohio Gov. John Kasich. Kasich and Bush had been grouped together in many conversations, along with New Jersey Gov. Chris Christie, as a group of governors. Historically speaking, the role of governor has often made for a natural segue into the presidency because of the parallels that the two roles share at their respective governmental levels.

The problem with Kasich, however, is that his candidacy seems even less viable than Bush's coming out of South Carolina. Kasich had an impressive showing in New Hampshire, where he came in second place behind Trump. In what was probably a sobering moment on Saturday, Kasich fell toward the bottom of the pack in South Carolina, with less than eight percent of the vote. Still, Kasich gave no indication that he would be leaving the race. Rather, he tweeted that he was still the GOP's best bet to win an election against former Secretary of State Hillary Clinton, who won the Democratic caucus in Nevada on Saturday.

Bush's departure seems to represent a turning point in the GOP's election. It's hard to imagine that a well-known Republican politician with connections to two former presidents was not a shoo-in for the nomination. It's been clear for weeks, at least, that Bush probably wasn't going to make the top spot on the GOP's ticket, but now that he's officially out of the race, there is a fair share of voters up for grabs and big name that could be used for endorsement.