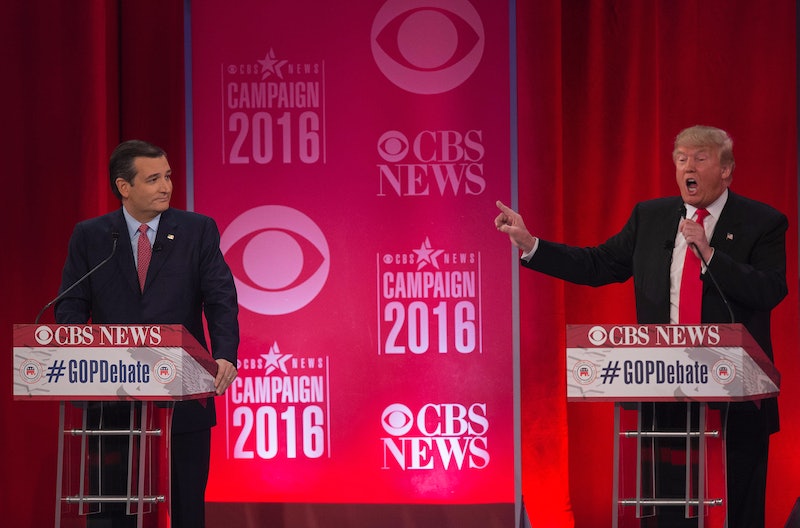 On Saturday, Donald Trump crushed his GOP opponents in the South Carolina Republican primary with nearly 33 percent of the state's vote, compared to Ted Cruz and Marco Rubio who virtually tied with 22 percent each. Jeb Bush (who later dropped out of the race), John Kasich, and Ben Carson all clocked in at about 7 percent of support. The remaining five Republican presidential hopefuls will face off again on Tuesday, and which Republican has an edge in the Nevada caucus probably won't come as a shock after Saturday's results.

Trump will head to Nevada with a lot of energy following big wins in New Hampshire and South Carolina. Even before winning the first southern primary, the Republican frontrunner polled at 45 percent of support from likely caucus goers in Nevada in a February CNN/ORC International poll. Rubio and Cruz, on the other hand, polled at 19 and 17 percent in Nevada respectively, with Ben Carson trailing behind with 7 percent and Kasich with 5. Bush, who suspended his presidential campaign immediately after the South Carolina primary, polled at only 1 percent in the state. According to CNN, about one-quarter of Republican Nevada voters hadn't made up their mind yet about which candidate to caucus for on Tuesday.

Although Rubio had the potential to do well in Nevada, it's no longer likely that he will. He has a widespread campaign operation in the state, and actually lived there for a few years as a kid. As the child of Cuban immigrants, he could attract crucial Hispanic voters, considering the Hispanic population is much larger in Nevada than in Iowa, New Hampshire, or South Carolina. Especially in comparison to Trump's calls for a giant wall on the Mexican border, Rubio has the ability to break out as the GOP's top candidate on immigration issues in Nevada. Despite the fact that he's slightly ahead of Cruz in the state, the early poll numbers don't look very promising for him.

In the same vein, Trump's harsh immigration plan and offensive comments about Mexicans could lead to some backlash, but his substantial lead in the polls is pretty solid. It would take a lot for Rubio or Cruz to pull off a win in Nevada at this point, and Carson and Kasich have even less of a shot. Of course, there's still time for the GOP candidates to campaign and sway voters in the western state, but Trump has a major advantage going into the Nevada caucus.