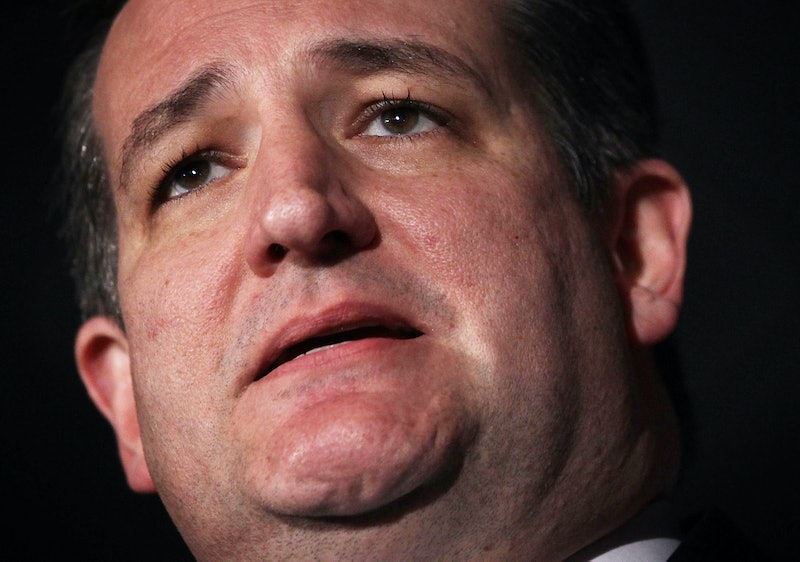 Donald Trump won the South Carolina primary by about 10 percent of the popular vote, and nobody who has had an eye on recent polls is surprised. Sen. Ted Cruz was in a dead heat with Sen. Marco Rubio for second place, and he lost that spot by mere tenths of a percent. But the popular vote isn't the most important number in primary elections — the delegate count is. Delegates work kind of like electoral votes during the general election; candidates are awarded a certain number of delegates from each state, who then go on to represent primary candidates at the Republican and Democratic National Conventions in the summer to determine who wins their party's nomination. How many delegates did Ted Cruz get on Saturday?

Zero. Zilch. Nada! At least as of late Saturday night. South Carolina had 50 Republican delegates up for grabs, and 44 of them are already in Trump's hands, reported ABC News. So how is it that, after formidable showings from both Cruz and Rubio, the two could walk away with nothing in the South Carolina delegate department? To understand that, we need to dip into the zany and confusing world of Republican delegate allocation, which varies by state.

According to ABC News, all but two congressional districts have come out in Trump's favor; the remaining two show a tight race between Rubio and Trump and results remain to be seen. But it's pretty clear Cruz can count on zero delegates from Saturday's contest. Currently, Donald Trump leads the pack with 61 delegates overall, Cruz has 11, and Rubio is lurking right behind Cruz with 10 delegates, ABC News reported.

Getting some delegates in South Carolina would have been nice for Cruz, as would have been beating out Rubio for second place. But neither of these things were in the cards for Teddy-boy on Saturday. We'll find out what Nevada has in store for him, and our other Republican candidates, on Feb. 23.