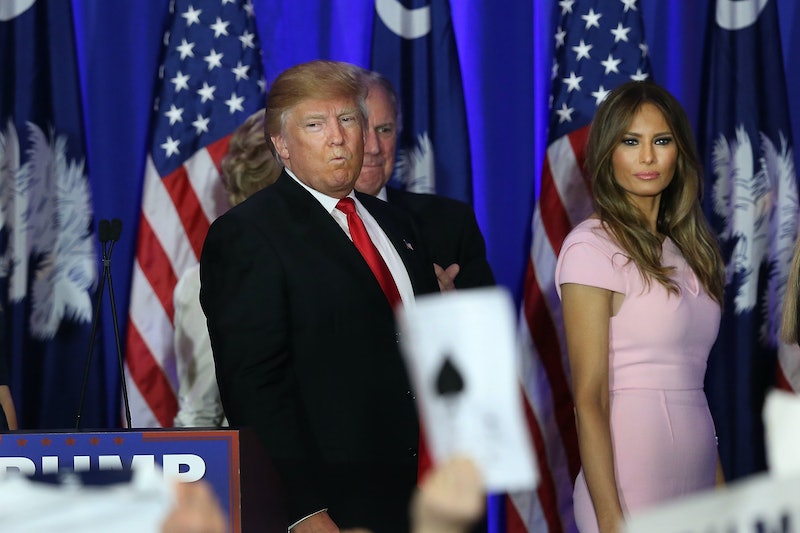 It's official: Donald Trump, the loudmouth businessman who seemed to be the butt of every mainstream media joke just months ago, has won big primary victories in New Hampshire and South Carolina. On Saturday, Trump topped the ballot boxes with a 10 percent lead over his closest contender, Florida Sen. Marco Rubio. Next, the GOP race turns its attention to Nevada, a state where 27 percent of the population is Hispanic. Given his anti-immigration views, it's hard to see Trump winning over Nevada's diverse population.

So how do you explain, then, that Trump actually has a substantial lead in the Nevada polls? According to RealClearPolitics, which averages together several polls tracking Nevada, Trump had a 22-point lead just days before the Nevada Republican caucus, which will take place on Tuesday. Sure, polls aren't always accurate predictors of election results, but the polls in both New Hampshire and South Carolina sure weren't wrong about Trump's lead.

As the primary system goes, Trump only has to win over Republicans in Nevada. In other words, he doesn't have to win over a majority of the general voting population, but rather just a majority of voters who already consider themselves to be conservative. His proposed immigration policies seem harsh even for Republicans, but there's no doubt that he'll have a better chance winning over Republicans, who tend to favor stricter approaches to immigration reform than Democrats, than winning over the general population.

In reality, it's not so much that the people who caucus for Trump on Tuesday will support his immigration policies. On the contrary, the support he receives will be more a result of his rhetoric on other issues. On paper, Nevada's high Hispanic population would make it seem like immigration should be an important issue to voters in that state — and it is. It's just not the most important issue. Like voters elsewhere, Nevada voters — including Latinos — say they're more concerned with a candidate's plan for creating jobs and boosting the economy. Health care also matters more than immigration, according to a 2015 survey.

Still, it's hard to ignore the things that Trump has said about immigrants and the policies he has proposed. Perhaps the loudest refrain from his campaign — other than "Make America great again!" — is that he's going to build a wall along the southern border of the United States — and he's going to make Mexico pay for the wall. Amidst all of his anti-immigration rhetoric, Trump still seems certain that he'll ultimately win the Latino vote because of his understood ability to create jobs and make money.

It's far from proven that Trump has any real pull with Latino voters. South Carolina, where Trump won big on Saturday, does not have a large Latino population like Nevada. In fact, Hispanics make up just five percent of South Carolina's population. New Hampshire, the other state that Trump has won so far, has an even smaller proportion of Latino voters. Thus, it may still be too soon to tell how Latino voters will react to Trump when the time actually comes to vote.

For now, the best clues about how Trump's anti-immigration views will play out in Nevada can come from the few polls to come out of the state, as well as Saturday's Democratic caucus results. Nevada's Democratic voters chose former Secretary of State Hillary Clinton over Vermont Sen. Bernie Sanders. Clinton's win was largely attributed to support among minority voters, who turned out in droves. According to exit polls as reported by CNN, minority voters made up about 40 percent of Saturday's caucus participants.

That's not to say that immigration was a deciding factor among those minority voters who caucused on Saturday. Rather, it only proves that the minority vote matters in Nevada, perhaps more so than it has in the earlier primary states. As such, Trump may find he has a harder time winning over voters if immigration does enter the conversation.