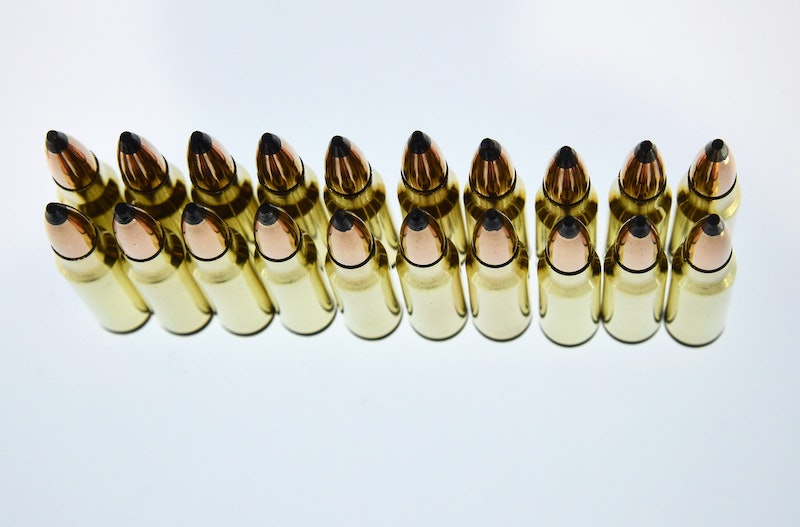 Reportedly random acts of violence left six people dead and two injured in the city of Kalamazoo, Michigan, Saturday night, once again reminding people of the epidemic of gun violence throughout the country. People often ask "why?" after a tragedy such as this, but the question of "how?" also remains forefront in people's minds. The Michigan gun laws aren't that different from the rest of the country — in fact, they may even be slightly tougher.

Michigan actually has one of the most thorough handgun purchasing processes in the U.S. It's one of the few states in the country that has a permit to purchase requirement for handguns, meaning that anyone who wishes to purchase a gun from a private party must file paperwork with their prevailing law enforcement authority. If the potential gun purchaser lives in Detroit, he or she must file the permit with the Detroit Police Department, and if he or she lives in a rural area, the local sheriff's office.

The permit to purchase process means that people can be denied access to a gun if they don't meet several requirements, like no previous felony charges or history of mental illness — it's the quintessential background check that gun control advocates always fight for. Finally, the permit seeker must pass a gun safety test provided by the licensing authority. Once the gun is purchased, it must be registered with the state.

Additionally, if someone wishes to carry a concealed weapon in public, they must apply for a separate license for concealed carry, and even that comes with restrictions. Those with permits aren't allowed to carry in a court, school, hospital, or a place of worship, and a few other locations that typically contain a large amount of people or children. Concealed carry is allowed in restaurants, but only if the establishment's revenue is less than 50 percent from alcohol. There is also a small but significant financial burden for that concealed carry permit — the application can cost up to $120 and must be renewed every four years.

Kalamazoo County nor Kalamazoo Township has any separate laws governing firearms, meaning these are all the restrictions that the shooting suspect would have had to comply with. Police seized a semi-automatic handgun from the suspect during his arrest. Although Kalamazoo County prosecutor Jeff Getting stated that it is unclear if he had a permit for that gun, Undersheriff Paul Matyas said he expects charges to be brought for the handgun.

"I would expect six counts of murder, two counts of assault with intent to commit murder, six counts of felony firearm, and then we'll see from there," said Matyas to a CNN affiliate. The suspect might face life in prison if Matyas' prediction holds true.