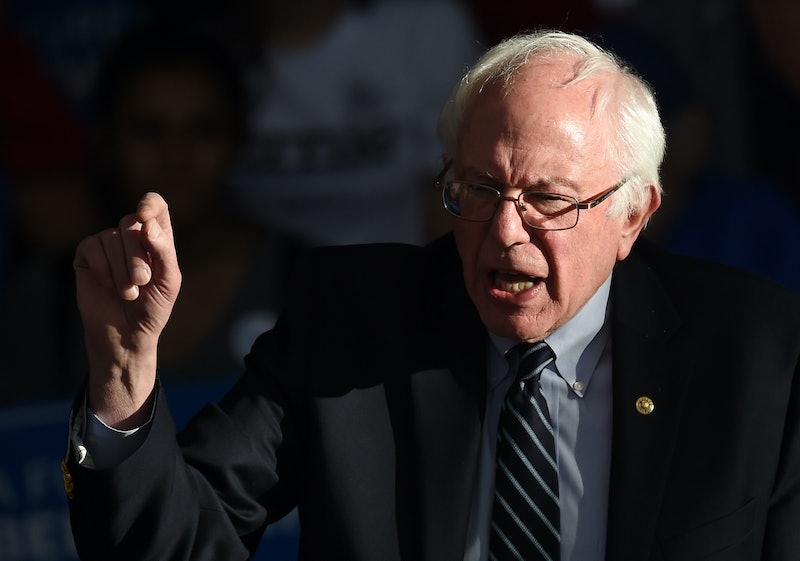 Sen. Bernie Sanders still somehow manages to have more inherent coolness than any other candidate running for president at this time, and recently it has increased upon the discovery of a video from 1963 where the senator was arrested while standing up for his beliefs at a protest of racial segregation. For those who doubted his participation in the Civil Rights movement, there's now more proof that he was definitely out there fighting the good fight. The Chicago Tribune conjured up an old photograph and video of Bernie Sanders arrested at a protest and being whisked away by two officers.

Sanders attended the University of Chicago, where he enrolled in 1960, and he graduated in June 1964 with a bachelor of arts degree in political science and one arrest under his belt for standing up for human rights. The Clinton campaign and others have questioned Sanders' commitment to civil rights; some, like civil rights leader John Lewis, have even gone so far as to declare they did not see Sanders at any major civil rights events. Well, for the naysayers, this video says it all. It is now clear that a young Sanders was willing to risk his own future in politics with an arrest on his record because he believed in doing the right thing. If that isn't a testament to the man's character, I don't know what else could prove it.

The short film clip depicts a man with short, wavy hair and thick glasses surrounded by police, and then subsequently carried off by two officers as he hunches forward. This event occurred in Englewood, Illinois, where Chicago Public Schools was planning to construct a new school. Sanders was protesting segregation at the new establishment.

On Monday, a film company called Kartemquin Films uploaded the footage, and on Friday, a spokesman for Sanders' campaign, Michael Briggs, and a senior adviser to the campaign, Tad Devine, said Sanders confirmed his identity in the video. Apparently, he recognized the watch he was wearing. Sounds awfully Bernie of him, doesn't it?

Now that voters know Sen. Sanders was actually present during the Civil Rights Movement, perhaps the two progressive candidates' respective bases can quit trying to prove who is more dedicated to civil rights. Both candidates have clearly put good time into eliminating institutional racism, and both Sanders and Hillary Clinton will do their best to continue the fight, regardless of who takes the White House.