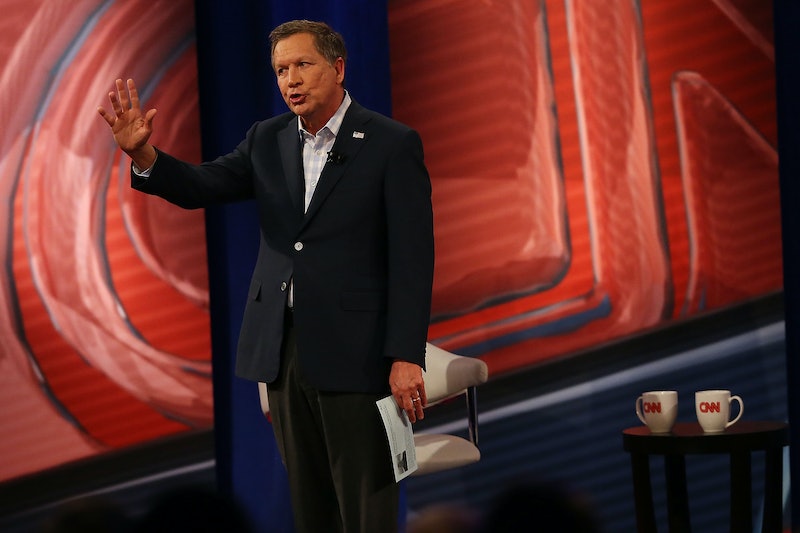 On Monday, referencing the time he ran for Ohio senator in 1976 during a speech at George Mason University, Republican presidential candidate John Kasich displayed an outdated and sexist perception of women when he proudly praised "many women, who left their kitchens to go out and go door-to-door and to put yard signs up for me." Unfortunately, Kasich was by no means joking when he made the remark. Though he was referring to women's role in his political campaign during the 1970s — a different era for feminism — the casually-stated allusion to women in the kitchen struck an unsettling chord.

As women in the crowd turned to look at one another in disbelief, an audience member raised her hand and said, "Your comment earlier about the women coming out of the kitchen to support you? I'll come to support you, but I won't be coming from the kitchen." Kasich embarrassingly replied, "I gotcha."

The woman displayed an admirable level of tolerance towards Kasich's remark, but as the video of his gaffe gains more views, members of the public are not likely to handle the situation as gently. The establishment candidate had no pressing reason to invoke the discriminatory past in such a manner. Forty years have passed since his campaign for Senator, and the times have changed.

Today, for example, couples tend to share household responsibilities equally, and women are expected to do a little more than go door-to-door and put up yard signs. But that all goes without being said. It's 2016 and a woman is running for president — women aren't restricted to the peripheral grassroots aspect of politics anymore. In fact, Kasich's own campaign manager, Beth Hansen, is a woman.

Kasich's support for women's rights isn't historically great — but neither is that of any Republicans running for office. Like Trump, Cruz, Rubio, and Carson, Kasich has shown zero support for women's reproductive rights and draws a hard line when it comes to abortion. According to Mother Jones, the two-term governor of Ohio has signed and approved 16 anti-abortion measures since being elected to office in 2011. Kellie Copeland, executive director of NARAL Pro-Choice Ohio, told Mother Jones' Allie Gross that she has some major reservations regarding Kasich's relatively "moderate" platform.

Kasich is a wolf in sheep's clothing. He's going out there trying to sell himself as a moderate, he's no moderate. He is an extremist. He is — if not the worst — among the worst of anti-choice governors in this country's history.

Though opposition to abortion has become a commonplace tenet in the Republican party, the mention of women in the kitchen, which came so naturally, should concern individuals from all political arenas. The gaffe comes after the candidate responded to a question earlier in his campaign from a University of Richmond female college student by saying, "No, I don't have Taylor Swift tickets for you." Like his remark about women's role in his 1976 campaign, the jab was simply unwarranted.