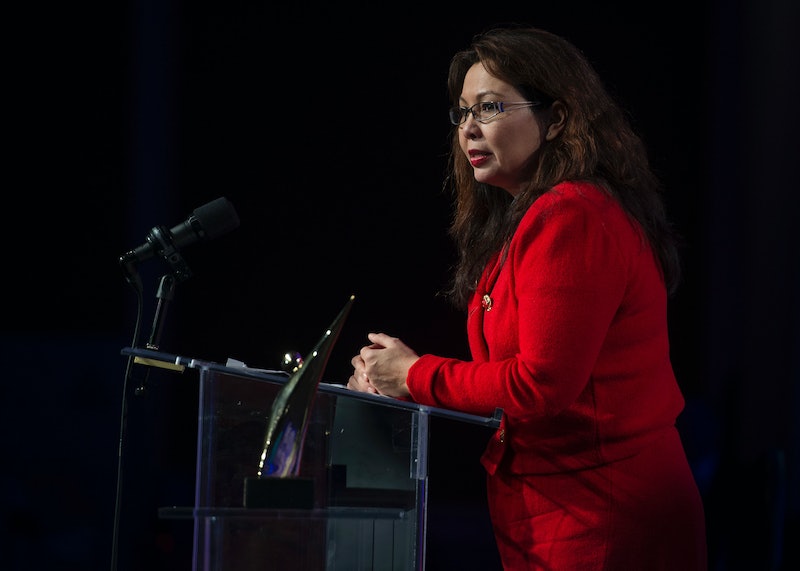 The race is on for an Illinois U.S. Senate seat, and three people are competing for the Democratic nomination in hopes of replacing Republican Sen. Mark Kirk, the current incumbent. Congresswoman Tammy Duckworth, former Chicago Urban League Head Andrea Zopp, and State Rep. Napoleon Harris had their final debate on Feb. 19 before the March 15 primary to discuss where they stand on the issues. However, in an attempt to knock down her opponent, Zopp criticized Duckworth for taking maternity leave and thus missing the opportunity to vote on numerous bills.

After the birth of her daughter Abigail on November 18, 2014, Duckworth took three months' maternity leave, which she talked about in the recent debate. Because of this, Duckworth missed 8.3 percent of the roll call votes, according to GovTrack. Zopp used this as grounds to accuse Duckworth of not taking enough action for the people and families in Illinois. Not only did Zopp attack her for taking maternity leave — saying that "missing the votes is bad" — but she also said that Duckworth "is not doing anything to really make a difference for working families in Illinois."

Duckworth is an Iraq war veteran, and lost both her legs in 2004 while she was piloting a helicopter that was attacked. When Duckworth gave birth to her daughter earlier than expected, in November 2014 (she was originally due in December), it marked an unexpected and monumental time for the congresswoman. She had just won her second term in Congress on Nov. 4, and Nov. 12 marked the 10th anniversary of her accident in Iraq. Duckworth said in the debate that her maternity leave inspired her to provide that same benefit to families all over the U.S.:

After she returned from maternity leave in March 2015, Duckworth remained committed to advocating for families across the U.S. Specifically, she cosponsored three bills that were directly related to helping families and children: the Family and Medical Insurance Leave Act, which provides individuals with insurance benefits due to medical absences, the Mental Health in Schools Act, which assists local communities and schools in expanding their public and mental health programs, and the Strong Start For America's Children Act, which provides additional funding and grants to create higher-quality pre-kindergarten programs.

Despite these bills, Zopp was still skeptical of Duckworth's qualifications, and said that Duckworth only cosponsored these bills after she announced her campaign for U.S. Senate. It is true that Duckworth cosponsored these bills around the time she put in her official senatorial bid. However, she was on maternity leave from November 2014 through February 2015, which made it nearly impossible for her to cosponsor anything until her announcement last March. In the debate, Zopp attacked Duckworth for this timeline, calling it a purely political move, rather than a genuine interest in helping families:

The fact is that the bulk of the bills she's supported or pushed have come after she announced have come after she announced for U.S. Senate. And it's all about the politics, it's about the show, about the talk. Not about driving real action for working families in Illinois. So yes, missing the votes is bad, but worse is not doing anything to really make a difference for working families in Illinois.

By criticizing Duckworth for her timing in cosponsoring these bills, Zopp is inadvertently criticizing her for taking maternity leave, which left her unable to fulfill her congressional duties. However, Zopp is not the only one attacking Duckworth; current Sen. Kirk recently called her "a naive fool not fit for office" because of her criticism of those — like Kirk and Donald Trump — who make derogatory comments against Muslim Americans.

The Family and Medical Leave Act (FMLA) grants U.S. workers 12 weeks of unpaid maternity leave. Duckworth took her 12 weeks — no more, no less — and instead of being applauded for working to cosponsor bills that would help families and working parents, she was criticized by fellow U.S. Senate candidates. Zopp's attack may have been presented as a criticism of Duckworth's timing of cosponsoring these bills, but an attack on the timing is truly a sad criticism of Duckworth's maternity leave.