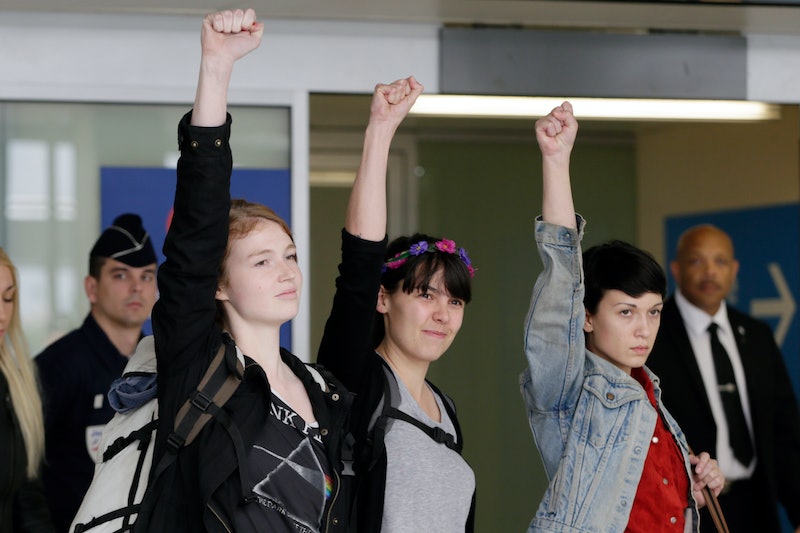 Occupying a space that would have at one time seemed radical, single and unmarried women now have a new place in the voting sphere — they have become one of the most politically important, if not the most powerful, voting blocks in this election. As reported by New York magazine, women are situated to be some of the most significant voters in the 2016 election. This is due to a societal shift that no longer requires women to be financially or socially dependent upon marriage. Based on the research from the New York article, these are some of the top points single women voters need to think about during this 2016 election.

It's also worth saying, though, that these points aren't just key for single women, but all women regardless of their marital status. Because of this overall societal divorce from the pressures to marry, women are now finding themselves free to occupy a political realm that they were once not even allowed in. And that is a space that all women should be and are rightfully encouraged to participate in. This renewed lease on female adulthood translates to some incredibly important moments for women, ones that various movements across the board have fought for throughout the last century.

1. Only 20 percent of women under the age of 29 are married, creating a radical difference in voting demographics.

This is obviously a huge shift from even our parents' days. According to a report by TIME, single women in their 20s now outnumber married women in their 20s, stripping away politicians' talks of "the sanctity of marriage" with issues that matter to the common voter.

2. This increase in single womanhood has given rise to issues presidential candidates would have once skirted around.

Issues such as paid family leave, free and pre-K education, pay equity, and raising the minimum wage are all being discussed in large part thanks to this growing block of single, female voters. While once considered too taboo to talk about, these issues have become much of the cornerstone for the Democratic candidates' platforms. Raising the minimum wage, for instance, would benefit women greatly, as they make up two-thirds of minimum wage workers, as reported by the National Women's Law Center.

3. The single women's voting demographic is growing each year.

Single women are now helping decide elections. As of 2012, unmarried women made up nearly 25 percent of the United States' entire voting base. According to a study from the Voter Participation Center, sixty-seven percent of them voted for President Obama in the 2012 election, and with growing numbers, they could just as well help sway this year's election too.

4. In the primaries and caucuses held so far, Bernie Sanders is winning the single woman vote.

This has been an interesting development to the presidential race. According to ABC News' analysis of New Hampshire's exit polls, single women helped Sanders beat Clinton by a solid 26 percent. For women in general, he beat Clinton out by 11 percent. This may, the article argues, be due to Sanders' optimistic message on issues that align with single women, such as healthcare reform and education.

5. This isn't the only time single women have made a huge difference in an election.

After the Civil War, when violence had caused a massive upset in the gender ratio that left many women unmarried, women rose to the helm on multiple reform movements. The movements on abolition and suffrage were largely led by unmarried women.

6. Men still benefit from marriage more than women do.

In the case of heterosexual couples, the article points out that men still receive the greatest benefits from marriage. As has been the case since marriage began, men get a professional boost from marriage while women's careers tend to suffer. According to a report by The New York Times, men with children likewise see a 6 percent increase in their overall earnings, while women take on a 4 percent decrease for every child they have.

7. Even Republican candidates are refocusing their campaigns, however minutely, on single women.

Former presidential candidate Carly Fiorina was perhaps the best on the conservative side of the aisle at her attempts to woo women voters. Though she has since dropped out, her debate performances provided Republicans with an antithesis to their usual "war on women" blunders. As the New York article points out, however, many attempts to pander to the single woman voter on the behalf of the GOP have fallen flat: they reference shaming tactics that leave women on the fringes financially and socially.

8. Despite their huge, potential influence, many single women are not registered to vote.

This is definitely a huge deal. Obstacles in the voting process make it difficult for groups like single women to get out the vote. But for those that can, it's paramount that they participate given this renewed focus on women's issues. According to Page Gardner of the Voter Participation Center, nearly 40 percent of unmarried women in the electorate did not register to vote during the previous election season. This is the first time in history, however, that unmarried women will comprise a larger percentage of the female vote than married women.

Given single women's unprecedented position in voting, it will be interesting to see just which way they vote come this year's election. But regardless of the presidential outcome, this newfound political power will surely continue the shift toward all women becoming more socially and economically independent.