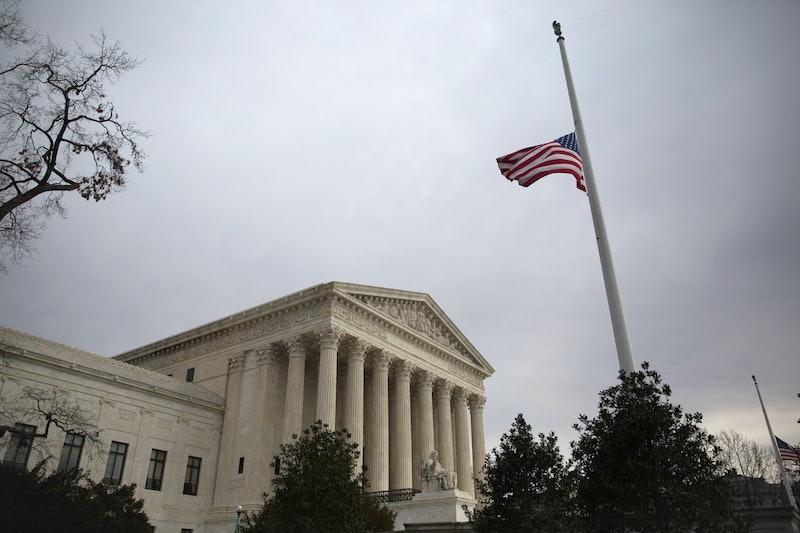 The Supreme Court has for nearly two centuries been intimately associated with the number nine. Though the number of justices changed more than a couple of times following the court's inception, the Judiciary Act of 1869 planted the number firmly at nine and it hasn't budged since. But with the recent passing of justice Antonin Scalia, both Washington and citizens across the country are facing the unfamiliar circumstance of a smaller-than-usual bench. What did the Supreme Court's first day back without the late Scalia look like? The day's sessions resembled, in many ways, a memorial to the man.

In line with tradition of the high court, Scalia's empty seat on the bench was covered with black drapery to signify the associate justice's passing. Chief Justice John Roberts spoke of Scalia's life and judicial career before the fellow justices and a filled courtroom.

We remember his incisive intellect, his agile wit, and his captivating prose. But we cannot forget his irrepressible spirit. He was our man for all seasons, and we shall miss him beyond measure.

The honoring of Scalia following his death this month has somewhat altered the typical order of proceedings for the Supreme Court bench. The high court normally publishes decisions on earlier cases immediately upon its return from a several-week break. In place of the private conference that would have been expected to take place on Friday was a ceremony in the Supreme Court's Great Hall to pay respects to the late justice.

SCOTUS did do SCOTUS-like things on Monday, though. The court resumed oral arguments — when attorneys on both sides of a case chosen by the Supreme Court are given the opportunity to verbally explain his or her party's points of law — for two cases. One case looks at whether it is constitutional for police to arrest a suspect following an unlawful stop if there is an outstanding warrant for the arrest of that suspect. The second focuses on a federal law that intends to set aside contracts for businesses owned by veterans.

A somewhat normal routine is expected to resume, with 10 cases scheduled to be brought before the court over the next two weeks. But the likelihood that the bench will hear these cases as a group of eight appears high, as the controversy over whether a nomination by president Obama would be shot down by the Senate persists.