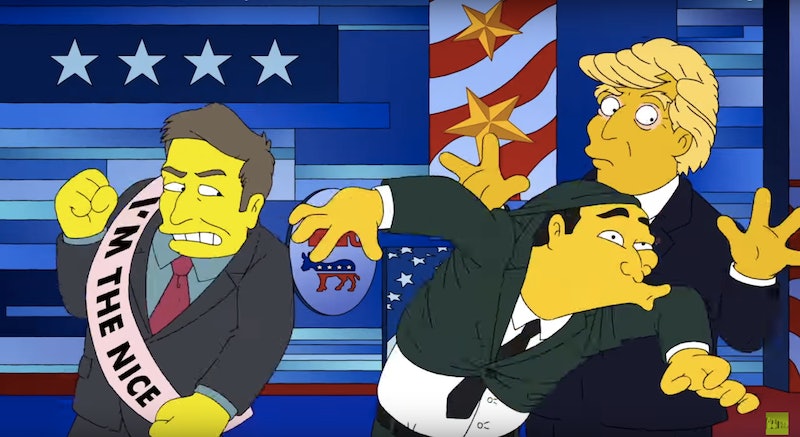 The Simpsons is taking on the presidential debates. Fox released a clip over the weekend that features Homer and Marge grappling with the 2016 election — or, to be more specific, the insanity and anxiety that the election has induced in many otherwise-well-adjusted Americans. While this is a struggle we can all relate to, The Simpsons' "The Debateful Eight" clip is also full of in-jokes and subtle references, some of which are hard to catch.

The clip starts with Marge Simpson having nightmares about the 2016 campaign. Her dreams are filled with painful memories of (actual, real-life) interactions the candidates have had at debates, and when they keep her up at night, Homer suggests that she imagine a happier, more civilized world, where all of the 2016 contenders get along and treat each other with respect and dignity (lol).

Homer's advice works at first, and you're treated to a sequence of the eight candidates joyfully singing and dancing with one another. It doesn't last long, however, and pretty soon, they're at each others' throats once again.

It's a funny enough clip on its own, but the crafty Simpsons writers slid in a number of esoteric references to the 2016 campaign that you may have missed if you have more of a life than I do. Here are some of them.

Early in the clip, Homer advises Marge to "visualize another America. One where Republicans, Democrats, and Donald Trump all get along." This is a reference to the fact that many conservatives don't consider Trump an authentic Republican, thanks to some liberal policy stances he used to have.

John Kasich, The Nice One

One of the candidates is wearing a banner with the words "I'm The Nice One" plastered on it. That's supposed to be John Kasich, who has played up his "aww shucks, I'm just a friendly Midwesterner" persona throughout his campaign.

Later in the clip, however, Kasich punches Cruz in the face, a decidedly not nice thing to do. This is most likely a wink-and-a-nod to the numerous reports suggesting that, in fact, Kasich is actually grumpy and cantankerous in person.

At one point, Ted Cruz twirls Hillary Clinton around in the air. "Don't drop me," she asks. "Just trust me," Cruz says. Then, he drops her.

Cruz has painstakingly attempted to depict himself as the trustworthy Republican in the race — he's utilized a banner that reads "TRUSTED," except with "TED" in different colors. However, many of Cruz's opponents have rightly criticized him for being less of a trustworthy candidate and more of a habitual liar.

This was pretty subtle. When confronting Donald Trump, Jeb Bush casually took off his glasses and threw them aside. Bush was actually criticized relentlessly for those glasses throughout his campaign, as many thought they made him look, well, nerdy and boring. After initially vowing to never take off his "stinking glasses," he relented in January and ditched the spectacles.

"Wanna see something my mother suggested?" Jeb! says right before kicking Donald Trump in the baby-makin' parts. Toward the end of his campaign, Barbara Bush advised her son to go harder on Trump in the debates.

One of the more obvious gags involved Marco Rubio awkwardly jerking around like a robot and repeating the same phrase over and over again. This is, of course, a callback to the "Robot Rubio" meme that was birthed after the Florida senator repeated the same line of attack four times in a row at a debate in New Hampshire.

"Goldman-Sachs says, 'Hello!'" Hillary Clinton shouts while strangling Bernie Sanders with a pearl necklace. That's a reference not only to Clinton's well-noted ties to Goldman-Sachs, but also a necklace she wore during a November debate that received rave reviews.