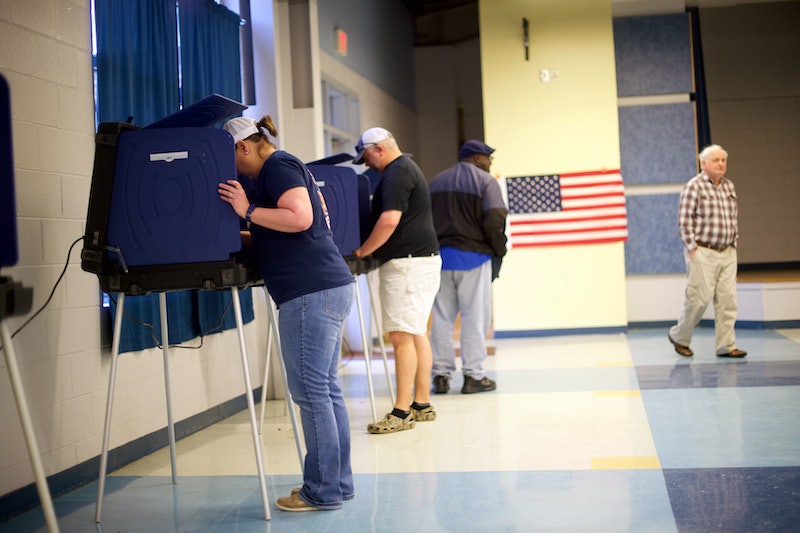 When it comes to crucial moments in the wacky world of election cycles, there's no competing with Super Tuesday. A whole slew of U.S. states choose to cram primary elections in a period of 24 hours, and American voters watch as presidential candidates sink or swim. You could reasonably question, then, what the designers of the event were thinking when they willingly fused state voting days, with the understanding that the country can barely handle Iowa's caucuses on its own. So why was Super Tuesday created? There's a whole rationale behind the insane day of primaries.

The phrase "Super Tuesday" saw its beginnings in the 1970s and refers to any date in late February or early March when multiple states plan to hold primary elections. Leading up to the 1984 election, there were actually multiple Super Tuesdays. (I guess states were really feeling the love for each other at the time.) But it was in 1988 that a crew of Democrats from Southern states came together and scheduled nine primary elections for the same day, providing the event a quality of officialness that had not existed earlier.

The pitch that got the mass-primary extravaganza going sound something like this: the Iowa Caucus and the New Hampshire primary, the first primary elections to take place in the country during an election year, receive a whole lot of hype although the results don't necessarily reflect how voters will view candidates when the real-deal election comes around. This could ring particularly true for candidates who might spend days or weeks appealing to residents of, say, New Hampshire on localized issues within the state.

"Super Tuesday was basically designed to nationalize the message, to try to reduce the influence of the so-called 'Iowa syndrome,'" former Virginia governor and senator Chuck Robb, who had a hand in organizing the first formal Super Tuesday, said in a 1988 NewsHour interview.

If candidates were forced to see how they'd place across a diverse group of states all in one day, they would, according to the designers of Super Tuesday, also be forced to see what American voters think of their electability based on broader national issues including foreign policy and the economy.

The mass-primary event is often likened to the actual general election because of the sheer number of voters that head to polling stations on Super Tuesday. Big victories for candidates on Super Tuesday have also been pretty solid indications that they will be the ones laying claim to the party nominations several months later.

So while Iowa and South Carolina may have been touting premiere state status over the last few weeks, there is strength in numbers. And the number of states heading to the polls on March 1 — more than a dozen — is far from insignificant.