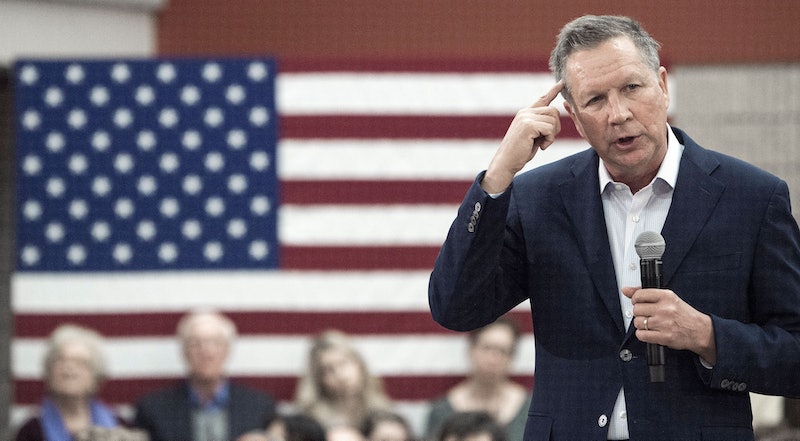 Republican presidential candidate and Ohio Gov. John Kasich spoke to a crowd at a town hall at George Mason University in Virginia on Monday, where he revealed his secret to winning a statehouse race in 1970. His big secret? Kasich said he got an army of people and "many women who left their kitchens to go out and go door-to-door and to put yard signs up for me." Juxtaposing women with people kind of sounds like he's removing female personhood though, doesn't it? And what's even worse than Kasich's kitchen comment is an issue that is central to personhood and bodily autonomy, and that's the question of funding Planned Parenthood, which Kasich ferociously opposes.

On Sunday, the Republican candidate signed a bill that prohibits health clinics in Ohio that perform or promote abortion from receiving some state and federal funding. A student who opposed Kasich's kitchen comment questioned him during the event stating, "As a future nurse, I recognize that primary care and prevention is the most cost-effective health care for our nation. But we are also facing an STD epidemic. Planned Parenthood's largest percentage of services are toward STD treatment and prevention. Can you please tell me the economic and public health benefit of defunding an organization that has treated over four million people seeking STD services this last year?"

Kasich essentially prevented $1.3 million in funding for HIV testing, health screenings, and prevention of violence against women. The move to block this funding follows a Feb. 18 GOP debate in which the candidate suggested that the U.S. needs an "all-out war" against violence against women. I guess he had to prove he's conservative enough for a nomination, at the expense of affordable healthcare for people in his state who depend on Planned Parenthood for far more than just abortion services.

Defunding Planned Parenthood takes accessible and affordable sexual health care away from a lot of people, most often poor women of color. Over 3 million low-income women were uninsured in 2014, making access to the clinic an even greater necessity. Kasich's opposition is reportedly based on the false findings of an anti-abortion organization's sting operation against Planned Parenthood last year that suggests the provider sells "aborted baby parts." A Texas grand jury cleared Planned Parenthood of any unlawful activity in Jan. 2016. And according to an October 2015 Gallup poll, 59 percent of Americans viewed Planned Parenthood favorably.

This legislation will have devastating consequences for women across Ohio. John Kasich is proudly eliminating care for expectant mothers and newborns; he is leaving thousands without vital STD and HIV testing, slashing a program to fight domestic violence, and cutting access to essential, basic health care.

According to a 2013-2014 annual report, Planned Parenthood abortion services represent only 3 percent of the organization's services. STD testing makes up 42 percent, followed by contraceptives at a 34 percent rate. Even if Kasich does oppose abortion services, which again make up only 3 percent of services, it's time he and other individuals in office start to realize that no matter what, ABORTION IS LEGAL. And it's time they stop trying to make it impossible for individuals to have access to legal reproductive rights and healthcare.

Legislating and controlling abortion seems to be more about controlling female sexuality than anything else. I sure am tired of old men in office making other individuals' reproductive and sexual health choices for them — aren't you?