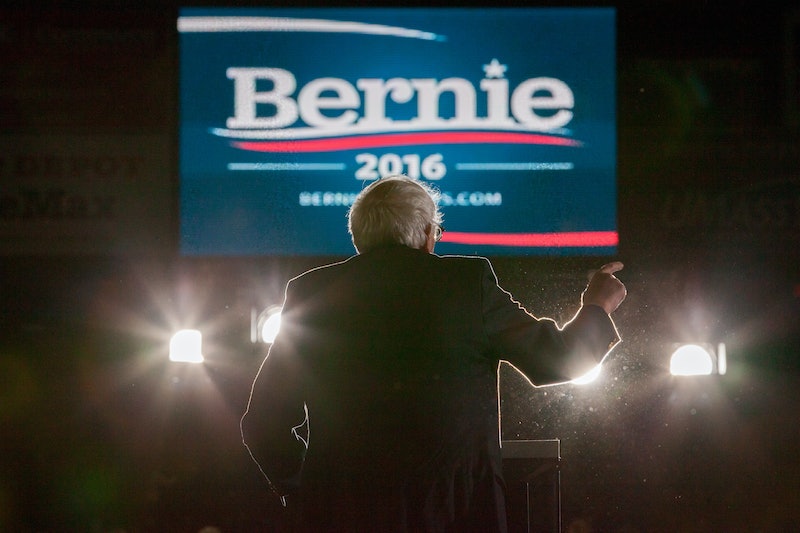 Of all the possible super PACs that could have thrown their weight behind Bernie Sanders, this one would probably be his last choice. Backed nearly entirely by billionaires and co-founded by Karl Rove, American Crossroads has been spouting the conservative agenda since the 2010 election. During the 2012 campaign, it spent millions trying to tear down Obama and win Republican control of the Senate, and their pro-GOP advertising spend hasn't dropped off since. So what's this about American Crossroads helping Bernie in Nevada?

Well, mostly it's about hurting Hillary Clinton. The conservative group spent massive amounts of money attacking Clinton, which in turn helped Sanders. The former secretary of state squeaked out a victory in Nevada after leading in the polls by a large margin for months. Sanders would say his political revolution is bearing fruit. But American Crossroads wants to take some of the credit too. Steven Law, president and CEO of Crossroads, said in a statement that their group should get some of the glory:

Super PACs often mimic the campaign rhetoric of candidates, but usually only a pro-Bernie group would do so like this. So it's interesting to see a conservative super PAC get in on the fight in the primaries, clearly picking the whoever-is-against Hillary side. Sanders has claimed time and time again on the campaign trail that he doesn't have an affiliated super PAC, and that's true, but it just so happens that the right-wing Crossroads agenda jives pretty well with Sanders — at least for now. Sanders will be the main beneficiary of their ads until the primaries are over.

"If it helps push the needle so that she loses a state, and she comes out a weakened candidate, then fantastic," American Crossroads' communications director Ian Prior told The Daily Beast about the anti-Clinton ads. The group is looking to create a "trust-deficit" early on for Clinton, when ads are cheaper and people are paying attention because of the primaries, Prior said. Why try to beat her in November, when you can beat her in February?

There has been a lot of negative spending that could help Sanders. Independent groups opposing a Clinton candidacy have vastly outspent those opposing Sanders — about $4.7 million to $784,000. The Republicans assume she will end up the nominee, and keeping Sanders as a strong competitor helps the GOP field in the long run. By evening the race somewhat, Clinton will have less money to spend in the general election, for example.

The biggest ad to hurt Clinton in Nevada was entitled "Hillary's Wall" — and it resonated with the voters who Sanders has struggled to reach. Subtitled into Spanish, the ad tries to draw parallels between Clinton and Donald Trump. It uses old video of a less pro-immigration Clinton talking about the need for a border wall. She also says people should stop employing illegal immigrants. She's asked by Univision's Jorge Ramos what the difference between her and Trump's ideas on building a border wall. Her answer before they cut away? "Well..." This is surely not helping Hillary.

Back in Iowa, it was about Wall Street. Sanders had been hammering the message against money in politics repeatedly. Then this Crossroads ad said Clinton raised more money from Wall Street than all of Iowa, she bailed out the banks, and then went on to be a paid speaker for some of the biggest firms. "I represented Wall Street," Clinton says in a clip from a Democratic debate — she surely means as senator of New York, but that's not what the ad implies. The ad follows the Sanders line of attack against the candidate, and surely helped him tie her there.

Even the other Republican super PACs that are "targeting" Bernie, are really helping him come out ahead of Clinton. They "attack him" but in a way that would make him seem more likable to Democrats. Future 45, another super PAC aired an ad that — according to its FCC filing — opposed the senator. But when you watch it, you get the idea that the ad could help him with primary voters. All the things he's attacked for in the ad are things the far-left progressives he's hoping to reach are for: free college, healthcare, and higher taxes.

If Sanders — with the help of the conservative super PACs — goes on to win the nomination, their support will stop immediately. But for now, with Clinton thought to be the ultimate winner, he should be able to count on their spending to help even the gap. What Crossroads will try in South Carolina is a mystery, but they've tweeted their support for the GOP's tactic — a page from their own playbook.