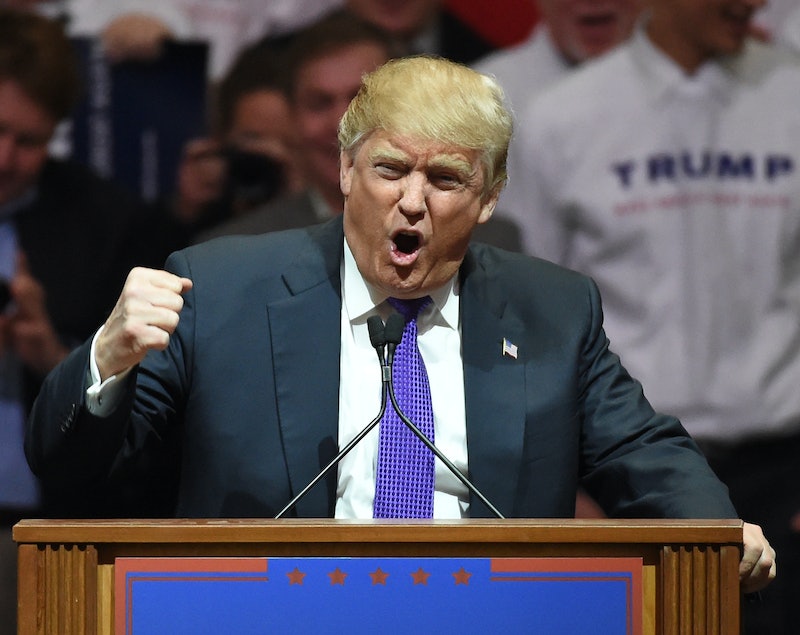 They say that was happens in Vegas, stays in Vegas. The same can't be said for Donald Trump, who said he wanted to punch a protester in the face during a Sin City rally on Monday night. Then again, he probably doesn't care whether or not the world knows what happened in Vegas, because he didn't seem to utter those words accidentally or impulsively. The inappropriate remark was 100 percent Trump — that's to say, purposeful — and this pompous "above the law" attitude, paired with a complete intolerance for any dissenting opinion, should be worrisome coming from a potential leader of the United States.

During his rally, Trump said the man was trying to assault security guards, but according to CNN, that didn't seem to be the case. The protester's smiling face also irked the GOP candidate, and Trump responded:

I'd like to punch him in the face. He's smiling, having a good time.

Trump's bellicose, domineering reaction to the protester is, sadly, an extension of the way it has become OK for politicians to belittle and insult individuals of the opposite mindset. Democracy is no longer a compromise between two parties that can agree to disagree. It's a dichotomy between protester and supporter, Democrat and Republican, and rooted in a normalized hatred.

Trump's attitude, along with his ability to get away with it and even gain support from it, is, in part, a byproduct of this system.

At the rally, Trump continued, "We're not allowed to push back anymore." This is essentially contradictory, seeing as the protester was pushing back. Furthermore, it's perfectly acceptable and legal for Trump rally-goers to use their words to "push back" against the person already pushing back.

Trump has a history of considering rash intolerance — an attitude that's truly frightening in the hands of a (sort of) politician. Similarly to how he mentioned that protesters would be carried out on stretchers "in the old days," Trump said that Army Sgt. Bowe Bergdahl should be shot down. Perceiving Bergdahl as a traitor is one thing — wishing death upon him is another.

The intolerance has applied in particular to the American-Muslim population. On a Jan. 8 in South Carolina, Rose Hamid, a Muslim woman engaging in a silent protest, was removed from a Trump rally and witnessed the implications of Trump's words first-hand, The Guardian reported.

My purpose for going there is I have a sincere belief that if people get to know each other one on one then they’ll stop being afraid of each other and we will be able to get rid of all of this hate in the world, literally.

By dehumanizing and indiscriminately grouping together protesters or any group of people, for that matter, Trump prevents this camaraderie from occurring. Hamid elaborated on the sentiment she felt in the crowd.

It was really quite telling and a vivid example of what happens when you start using this hateful rhetoric and how it can incite a crowd. I don't even think he believes in the rhetoric he is spewing.

Near the tail end of a trip to Mexico, Pope Francis shared some wise words about the implications of Trump's rhetoric and the way it pits people against each other. Before insulting Muslims, Trump propelled a discriminatory attitude towards immigrants, especially those coming from Mexico.

A person who thinks only about building walls, wherever they may be, and not of building bridges, is not Christian. This is not the gospel.

The Pope's remark can be taken both literally and figuratively, in the sense that Trump is building walls between people who agree with him and those that disagree with him. And it's not about being "Christian" or following the gospel. It's about being a decent human being who brings people together under an ideological umbrella of acceptance and tolerance, a person who deconstructs the walls society has already built. Trump is not that person.