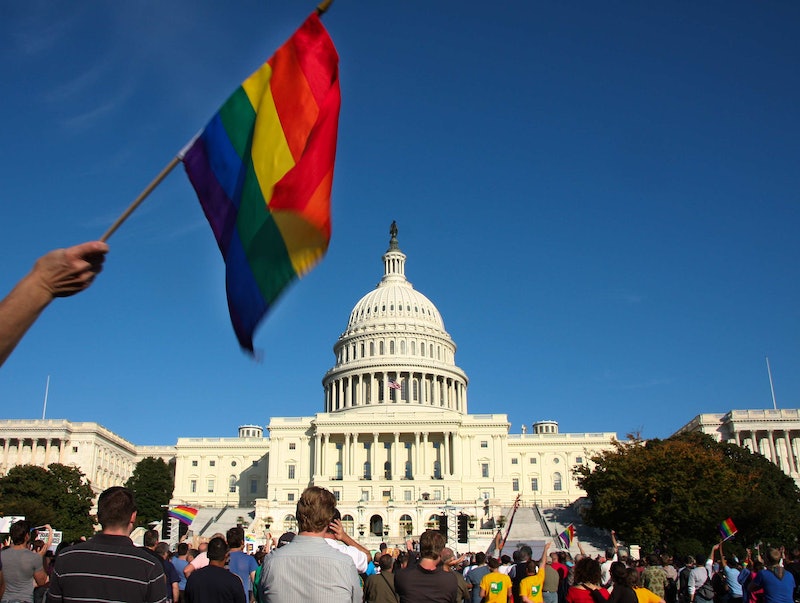 Disgusted by that South Dakota anti-trans bathroom bill? Well, it's just one of 175 anti-LGBT bills introduced this year in more than 32 states, according to a new HRC report. From coast to coast and border to border, state legislators have targeted the rights of lesbian, gay, bisexual, and transgender citizens. The number is truly unprecedented. In just the first two months of 2016, the number of proposed anti-LGBT bills surpassed the record reached in 2015 of 125. And that's in just two months.

The growth in anti-trans bills is even more terrifying. According to the HRC report, last year, 21 of the bills targeted transgender individuals. But that figure has been blown out of the water these past two months, as transgender people, particularly students, have been targeted in state houses in an effort to restrict their use of bathrooms, locker rooms, and sports that align with their gender identity. Already, 44 anti-trans measures have been introduced.

The vast majority (29) are similar to the South Dakota bill, which would require all students to use the bathroom, locker room, and shower facilities that correspond to the gender they were assigned at birth, not their gender identity or gender expression. The bill was passed by the state's house and senate, and Gov. Dennis Daugaard, a Republican, is still deciding whether he will sign it.

The bill goes against the standard compelled by law in 17 other states and by ordinance in even more cities and jurisdictions around the country. There have not been incidences in districts where transgender students have been treated fairly, so why even go down this path? Transgender students will be less safe. Plus, there's the chance it could lead to court fights, as Title IX does not allow for such discrimination.

The HRC report spells out why these sorts of laws can't be tolerated:

But it doesn't stop there. Some states have targeted every bathroom within their borders — not just those in public schools. Under these bills, transgender individuals would be fined if they were caught using a bathroom that did not align with the gender they were assigned at birth. Other bills would require proof of surgery to use a bathroom that fits with a trans individual's gender identity.

Some of the other proposed laws are plain ludicrous. "First Amendment Defense Act" bills have been expanded to let people discriminate against transgender individuals in addition to same-sex couples. Other states are trying to invalidate local nondiscrimination ordinances. Some would make changing one's gender on a birth certificate and other government forms close to impossible.

The worst, arguably, interfere with marriage and healthcare. Several states are trying to legislate away their responsibility to pay for healthcare for transgender inmates. One would potentially require those applying for a marriage license to say whether or not they have ever received a sex assignment surgery. The answer would be printed on marriage certificates.

Despite the advances made in 2015 — gay marriage is the law of the land, and transgender people have reached new levels of support among the general public — there is still much work that must be done to protect the LGBT community legally, particularly transgender Americans.