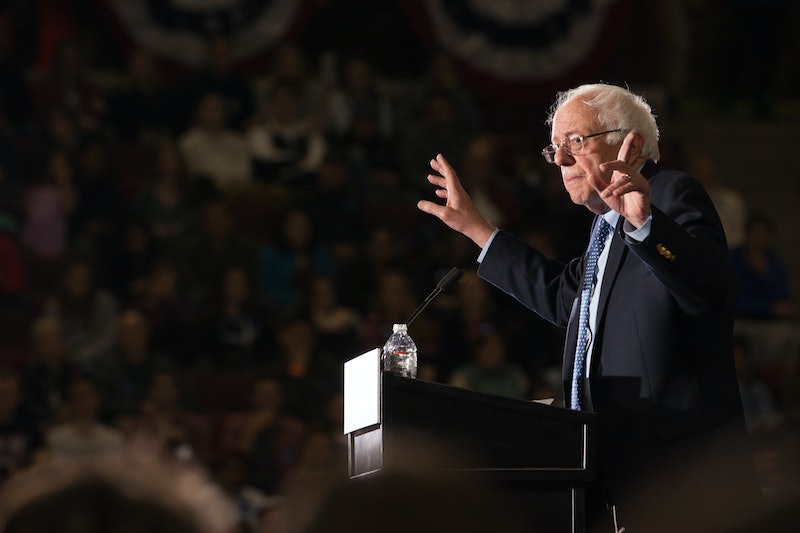 Presidential candidate Bernie Sanders just added a new name to his long list of celebrity supporters: filmmaker Spike Lee. Lee officially endorsed Sanders with a radio ad released Tuesday. It will air in South Carolina just before it holds its Democratic primary election on Saturday. Lee joins Sanders' efforts to court the black vote in South Carolina, hoping to pull the dedicated demographic away from competitor Hillary Clinton. Clinton won black support in Nevada by a margin of 54 percent, and currently holds a 37-point lead with African-Americans in the latest South Carolina polls.

Lee's ad highlights Sanders' civil rights record, including his arrest at the University of Chicago during an anti-segregation protest and presence at the historic march on Washington led by Martin Luther King, Jr. Actor Danny Glover has also joined Sanders' cause in South Carolina, attempting to sway black voters for the senator at a rally in Greenville on Sunday night.

For Sanders, a strong showing in South Carolina is essential to a realistic run at the Democratic Party's presidential nomination. He's lost every primary so far save New Hampshire, but those losses were all by extremely close margins. If the current statewide polls hold up on Saturday when South Carolinians vote, a decisive Clinton victory will set an unfortunate precedent for Sanders going into next week's Super Tuesday contest.

Right now, the Democratic candidates are neck and neck in the Super Tuesday states. Sanders' home state of Vermont is a lock for the democratic socialist — he's clobbering Clinton in the polls with a 75-point margin. However, he is already falling behind in some Southern states. Clinton leads by 10 percent in Texas, a crucial state which carries 193 Democratic delegates — 17 of whom are superdelegates who have already pledged to support her. It's a serious possibility that Sanders could pull still off an upset there — unlike in Georgia, where Clinton's 52-point lead means that Sanders will almost definitely cede all 89 of the state's delegates.

But before Super Tuesday, Sanders has to fight back against Clinton's lead in South Carolina, and that means winning over black voters. Help from black celebrities like Lee and Glover is crucial to his cause, but Clinton has her own weapons. Morgan Freeman narrated a new Clinton ad released Monday to play in South Carolina leading up to the primary, and 12-time representative and third-ranking House Democrat James Clyburn endorsed Clinton on Friday. The two candidates are battling it out, and each have something to prove. Clinton wants to show she really is the decisive frontrunner, while Sanders wants to show that he can bring it on Super Tuesday.