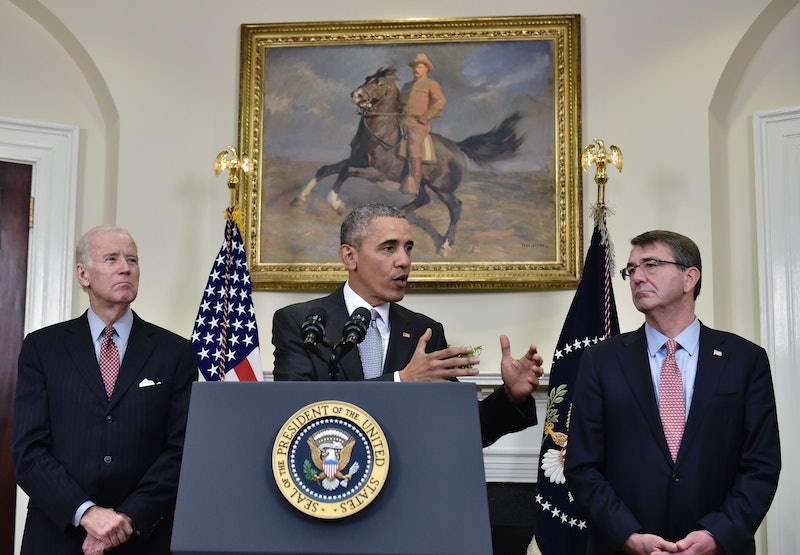 On Tuesday, President Obama delivered a Pentagon proposal from the Roosevelt Room of the White House, urging Congress to review his plan to close the Guantanamo Bay detention camp. The president has promised to shut down the prison, known for holding terrorist suspects, since he was first campaigning in 2008. In many ways, that promise helped to strongly distinguish him from his predecessor, George W. Bush. Today, with less than a year left in his second term, this pledge remains unfulfilled. But the effort has nevertheless been valiant.

In January 2009, shortly after moving into the White House, Obama signed two executive orders that went hand-in-hand, but ultimately flopped. One required Guantanamo to be closed within a year, and the other banned torture. Shortly after Obama signed the documents, he assured citizens that America doesn't have to compromise its basic ideals in order to maintain an adequate level of safety.

[Closing the facility will] restore the standards of due process and the core constitutional values that have made this country great even in the midst of war, even in dealing with terrorism ... We believe that the Army field manual reflects the best judgment of our military, that we can abide by a rule that says we don't torture, but that we can still effectively obtain the intelligence that we need.

This speech was made over seven years ago. Thus, this issue may prove to define both the beginning and the end of Obama's presidency. One quote from his most recent address reiterates his quite basic reasoning for shutting down the facility. Obama said it back in 2008, and he stands by it today:

Keeping this facility open is contrary to our values.

The prison is morbidly known for its interrogation techniques, which reportedly include torture and have been scrutinized since the Sept. 11 attacks. In January 2014, the Senate released a report on the interrogation methods and torture employed by the CIA over the years. Humaneness aside, the report found that the measures taken at the prison ultimately bore no breakthroughs regarding terrorist activities. California Senator Diane Feinstein, who led the investigation, concluded that national security was in no way strengthened by torture:

I can understand the CIA's impulse to consider the use of every possible tool to gather intelligence and remove terrorists from the battlefield, and CIA was encouraged by political leaders and the public to do whatever it could to prevent another attack. Nevertheless, such pressure, fear, and expectation of further terrorist plots do not justify, temper, or excuse improper actions taken by individuals or organizations in the name of national security.

The CIA strongly contested that conclusion, and according to Feinstein, it attempted to remove certain documents from the report and discredit her. In essence, Guantanamo is a problem because its prisoners are subjected to interrogation methods that are not allowed in American prisons. Whether or not these methods constitute torture varies according to whom you ask.

Title 18 of the United States Code prohibits torture, defining it as "acts specifically intended to inflict severe physical or mental pain or suffering." In 2012, the CIA described its methods to 60 Minutes as intended to inflict “a sense of hopelessness [and] despair” in their detainees. That description eloquently glosses over the possibility of physical pain, and that's where the grey area exists. For example, the CIA admitted to resorting to waterboarding in certain cases under the Bush administration. Simulating drowning is a fear tactic that doesn't necessarily cause direct bodily harm, but it's still a horrendous thing to imagine.

Obama's new address is especially relevant in the context of the upcoming presidential election. Donald Trump, for example, has publicly said he would "bring back a hell of a lot worse than waterboarding" during a GOP debate in New Hampshire. He then won that state's primary. Obama's endeavors to close the prison have become infinitely more urgent. The president's plan lists 13 potential sites where Guantanamo detainees could be moved to within the states, but Republicans are likely to dissent.