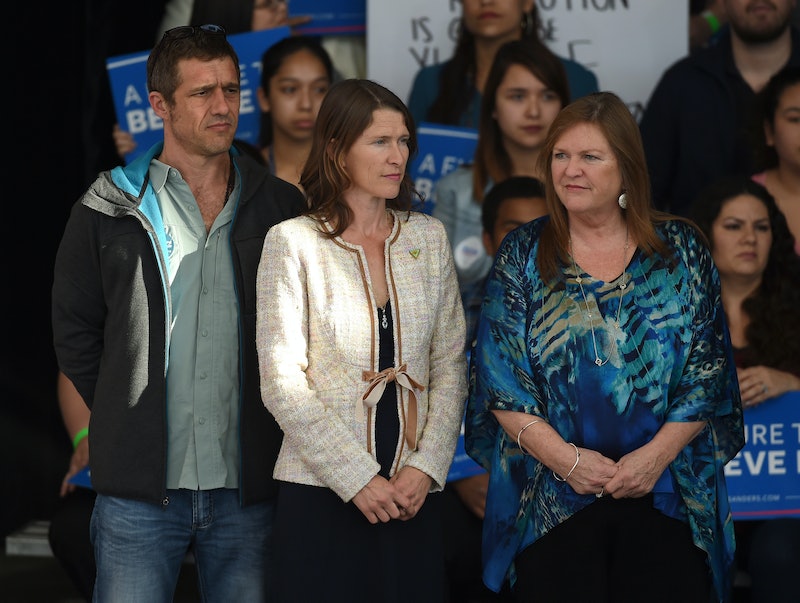 Presidential hopeful Bernie Sanders is more than just a man seeking a seat in the White House. He's also a family man and a cool grandpa. He doesn't take the name, "dad," not with his son, Levi, or with his step-kids, Heather Titus, Carina Driscoll, and Dave Driscoll, from his wife Jane O'Meara Sanders's first marriage. They've always only called him B, Bern, Bernster, or Bernie. So, what's the Vermont senator's family like?? And who is Heather Titus, Bernie Sanders' stepdaughter?

Titus and her husband, Marc, live in Sedona, Arizona, where they own and manage My Sedona Yoga and produce the Sedona Yoga Festival. The festival is three days of yoga practice and music, with over 108 presenters who facilitate over 200 classes, workshops, and events. During the 2014 event, the festival offered training to instructors who wanted to work with veterans through therapeutic yoga practices.

It seems as though Sanders' values have impacted his children in a positive way to bring social justice values to some of the communities who need it most. On growing up in Burlington, Vermont, with Sanders as the mayor, Titus told local Arizona newspaper Verde Independent, "I was brought up in a family that was about building community. I was really empowered as a young person in Burlington at that time. We felt like we could do anything we could think of. ... We felt we had a voice." And this idea has been central to Sanders in his campaign, as he has repeatedly sought to empower his supporters' access to rights to fair living wages, and fighting the institutional racism that plagues our country.

Although Titus and her husband haven't been very involved in Sanders' campaigning so far, we've seen her at a few events. They joined a podium with Sanders at the Phoenix Convention Center in July 2015, where a crowd of 11,000 people came out in support of the candidate. Titus also spoke to a crowd at the Prescott Public Library in Prescott, Arizona, on Feb. 17, urging support for the Vermont senator. During her speech, she asked that supporters vote based on their hopes for change, rather than the messages of fear that are central to other campaigns. She told the crowd, "I have a lot of faith in the American people, and I have a lot of faith in Bernie to be able to get things done. I have faith in his judgment."

Sanders' values of community-building have definitely stuck with Titus, whose practices are "committed to building community and offering service in the worlds of yoga, arts, sustainability, and consciousness," according to her bio on the Sedona Yoga Festival website.