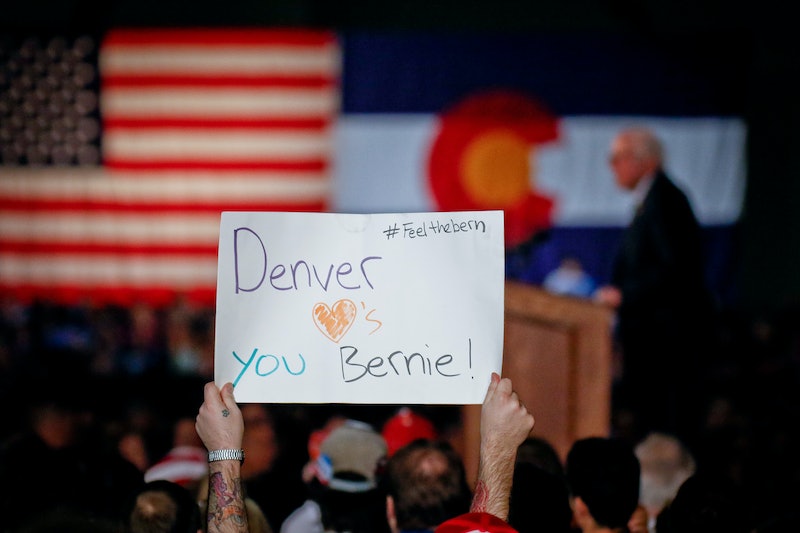 If you don't live in a caucus state, the process can seem much more complicated than what you learned about in elementary school. If you do live in a caucus state, you probably know what to expect when the town-hall-style meetings roll around — unless you live in Colorado, in which case, you probably still have no idea what you're doing. On Super Tuesday, throw out what you know about Iowa and Nevada, because the Colorado caucus process is way too complicated and unpredictable.

On Tuesday, voters in Colorado will get to add their voices to the chaotic race that is this year's presidential election. They won't be the only state to do so. On what's known as "Super Tuesday," voters from 15 other states, including Virginia and Georgia, will also cast their votes. The difference, though, is that Colorado won't actually declare any winners or losers, thanks to its unique (read: strange) precinct caucus process. As a result, there could be little incentive for candidates to talk about the state and little motivation for voters to give up their evenings to participate. That's a stark contrast to the early caucus states of Iowa and Nevada, where the unique processes have likely increased the attention placed on the states.

As with all states, the Colorado caucuses are all about delegates. Ultimately, delegates will go to each party's nominating convention to choose the party's nominee for the presidency. In most states, delegates are awarded one of two ways: They can be allocated proportional to a candidate's percentage of the vote, or they can be assigned on a winner-take-all basis, in which the candidate with the most votes wins.

In Colorado, things work differently. Delegates are "unbound," which means that they can ultimately choose to support whichever candidate they want when it comes time to head to the national party conventions this summer. On Tuesday, delegates will campaign for the candidate they prefer, and voters will choose delegates based on their candidate preferences. On the Democratic side, delegates really have no reason to stray from their preferred caucus candidate when the nominating convention occurs this summer, which means that the delegate breakdown determined on Tuesday will likely reflect an unofficial winner in the state. That's good news for the candidate who "wins," because Colorado has 79 Democratic delegates to award.

On the Republican side, though, things get even more complicated. The state Republican party chose to do away with its presidential preference poll (aka its straw poll) because the national party organization decided that presidential preference polls must result in bound delegates. In other words, delegates must vote for their assigned candidate at the party's nominating convention in July, if they're assigned by a presidential preference poll. Delegates assigned to candidates like Jeb Bush and Chris Christie, who have dropped out of the race since winning their delegates, will essentially be voting for an empty seat. To circumvent this, and to make sure that each delegate's vote goes to an actual candidate, the Colorado GOP did away with the preference poll. As a result, the candidate who seems like the GOP winner in Colorado on Tuesday could very well end up falling short of another candidate when the convention actually rolls around.

Not to make things even more complicated, but Tuesday's caucuses in Colorado are just the first step in the state's primary process. On Tuesday, voters — only those who were registered with their party by Jan. 4 — will select delegates at the precinct level. Later in March, those delegates will head to the state's county conventions, where delegates represent their precincts in voting to send delegates to the statewide conventions, which will happen in April. The statewide conventions, then, will determine the delegates who attend the national nominating conventions in July. I know that's complicated, so think of it this way: Colorado's primary voting process is basically one of those Russian nesting dolls, with one small process inside of another larger process, inside of yet another larger process, and so on.

Colorado's caucus process isn't just complex — I'd argue that it's problematic. Many experts in the state are worried that the complicated nature will scare some voters away. For other voters, the logistics of it all simply won't work. Caucus-goers had to be registered, with their parties and for the caucus, on Jan. 4. In other caucus states, including Iowa and Nevada, parties offer same-day registration, meaning that you can show up on the day of the caucus to register with the party.

In Colorado, not only do you have to set an evening aside to go hang out with your neighbors and listen to them argue over politics, but you also had to have had the foresight to plan for that exhilarating experience nearly two months ahead of time. Not to mention, all that hard work won't even be rewarded with a clear picture of whether or not your candidate has truly won your state.