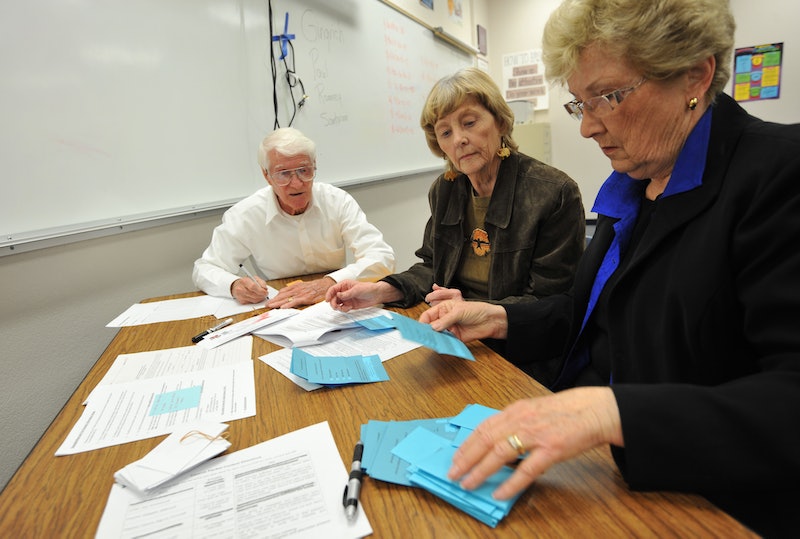 Republican voters in Nevada caucused for the GOP candidate they want to see in the White House in 2017 on Tuesday night. Despite only five candidates remaining in the race, the Nevada GOP caucus ballots included the names of many old presidential hopefuls. Jeb Bush, Chris Christie, Carly Fiorina, Mike Huckabee, Rand Paul, and Rick Santorum were all on Tuesday's ballot despite the fact that many dropped out days and weeks ago.

If caucus-goers didn't realize one of the extra candidates on the ballot was no longer in the 2016 race or voted for a dropout as a joke, they could potentially beat one of the actual contenders. It's always disappointing to lose a vote, but it would be especially embarrassing to lose the Nevada caucus to a former opponent who ended their bid for the Oval Office. Not to mention, it also seems confusing for people trying to seriously vote — a ballot containing 11 names, six of which are no longer legitimate, is just asking for mix-ups. Nevada's Republican party must have printed their ballots way ahead of time, considering Huckabee dropped out Feb. 1, and Paul and Santorum followed Feb. 3.

Democrats didn't have the same issue in their Nevada caucus Feb. 23, as it's been only Hillary Clinton and Bernie Sanders in the race for the party's nomination for a while now.

All the additional names highlight how far the GOP primary election has come already. Only one month into the race for the nomination, the number of GOP candidates has dwindled from 17 to just five. There are actually more candidates no longer in the race on the Nevada ballot than candidates who are still chasing the nomination. Because the GOP has seen so many contenders drop out recently, there could be former candidates on ballots in various states on Super Tuesday March 1 as well.

There were also reports that some Nevada caucus locations ran out of ballots Tuesday night — so not only were they really outdated, but there weren't even enough to go around. If they contained only the necessary five names, they could have used all the additional paper to print more.