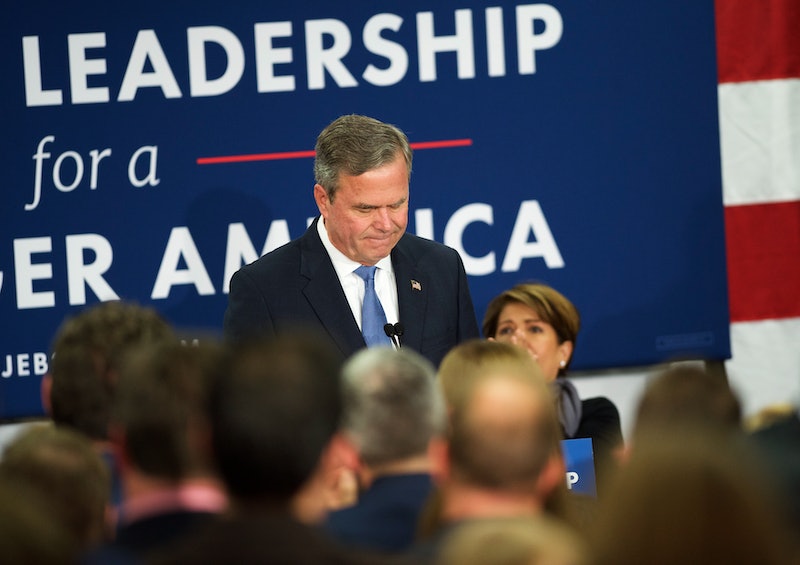 As we go through our first primary/caucus cycle since the GOP South Carolina primary, there has been a gaping, exclamation-mark-shaped hole in the Republican field. Yes, that's right: As the Republican Nevada caucus unfolds, the Internet is mourning Jeb(!) Bush, who suspended his once-anticipated presidential campaign after dismal results in South Carolina. But Twitter is keeping its favorite presidential punching bag alive through jokes and memes with #JebsNextMove.

If you step back and think about it, Bush's campaign was kind of a devastating fall from grace for the former Florida governor. He was a well-connected, well-funded, polished candidate from a bona-fide political dynasty. It seemed that he was derailed mostly by the antics of Donald Trump, who unabashedly bullied Bush into the political doldrums.

That wouldn't be a particularly funny situation if Bush hadn't left his campaign so open to comedic fodder. From his awkward please-for-the-love-of-God-clap moment to running to his mommy for help, Bush became the most mocked candidate in the 2016 field. So much so, in fact, that even The New York Times noted that political reporters would miss his campaign. The scrutiny from other candidates, who picked on him relentlessly, has died since he announced he'd be dropping out of the race. But unfortunately for Jeb!, the Internet hasn't forgotten him just yet.

And of course, there was a whole legion of people who had plans for his, er, crowd control, capitalizing on the most immediately meme-able moment of his 2016 presidential bid: When he had to ask voters to clap for him while speaking at a campaign event.

Well, Jeb, sorry that the most enthusiasm for your campaign came through people making fun of it.