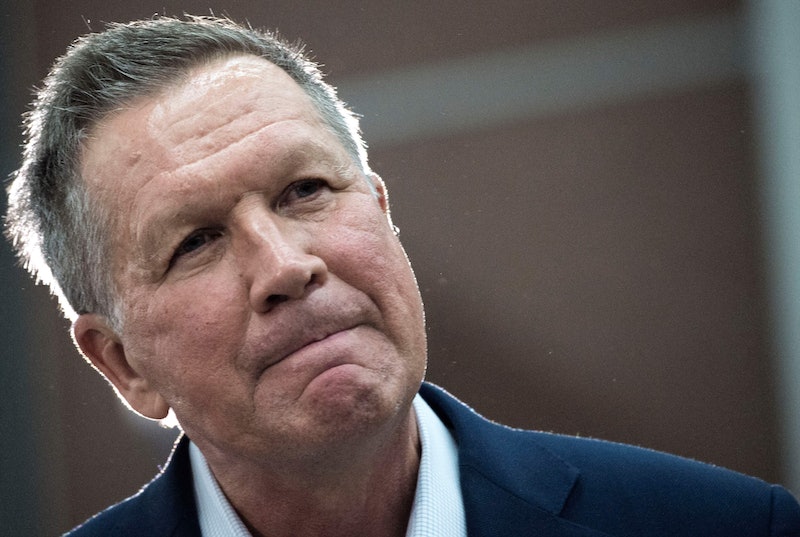 Results from the GOP Nevada Caucus were thoroughly predictable. Within a minute of polls closing, news outlets like CNN and the Associated Press called the state for frontrunner Donald Trump. Rounding out the top three are the two candidates who continue to be bridesmaids, yet rarely brides: Ted Cruz and Marco Rubio. Though just five Republican presidential hopefuls remain, it appears that at least one of the two lower polling candidates have shown no signs of suspending their campaigns. Ben Carson has already addressed media following caucus locations closing, leaving voters to wonder if John Kasich will drop out after Nevada.

Kasich has stayed thoroughly quiet throughout Tuesday night, though earlier in the day he did appear to hint at uncertainty about his campaign. The Ohio governor, aka "The Nice One," seems to take a spiritual, almost philosophical approach to his quest for the presidency. Speaking at a town hall rally held in Kennesaw, Georgia, Kasich had this to say about his political ambitions:

I don't know if my purpose is to be president. My purpose is to be out here doing what I think I need to be doing, and we'll see where it ends up. And if it's not this crusade, it'll be another one, and maybe it'll be a really small one, somewhere in my kid's school — who knows? Because it doesn't matter the size of the crusade — it's the fact that you are in a crusade.

For a candidate such as Kasich, it appears that his low polling in Nevada and overall campaign lethargy is inconsequential to the lives he's touched on the campaign trail and the message he's focused on spreading to the masses. The candidate has spent many town hall-style rallies hearing personal stories from supporters and comforting them when they express just how meaningful Kasich's candidacy is to them. He has acted as emotional support for a mother of an autistic son at a rally at George Mason University. He has also comforted a supporter who lost numerous family members to suicide. Kasich embraced the woman at a Virginia Commonwealth University rally in a move that has become commonplace at political events for the candidate.

But such heartfelt moments haven't necessarily translated into votes, as Kasich currently trails all five other Republican candidates in the GOP Nevada caucus. Still, he appears to be willing to continue to campaign. As the Ohio governor has personally said, it's not the end game of nabbing the Republican presidential nomination that matters but rather the fact that he's fighting for what he believes in. For that reason, Kasich appears to be willing to stay until the bitter end regardless of how low he may poll.