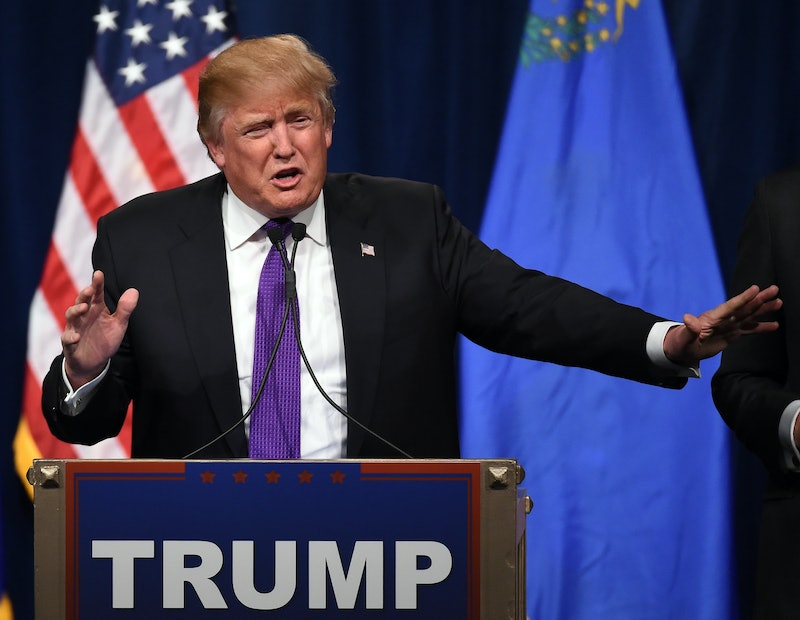 As the exit polls from the Nevada caucus rolled in overnight, there's one statistic that's worth paying attention to: Donald Trump actually won a plurality of Latino voters in the state. But that's not the group Trump is most excited about. And you'll never guess which demographic's support pleases the Donald the most — especially because he considers himself one of them. This one quote sums up Trump's Nevada win, and his campaign in general:

Let's set aside his enthusiasm for the Latino vote for a second. He loves the poorly educated. No, really, he loves them. And of course he would if he includes himself in the bunch. Of all the ways to slice and dice the demographics, they support him at the highest level. Some 57 percent of caucus-goers with a high school education or lower caucused for him, according to CNN entrance polls.

In Nevada, the ABC entrance poll shows 61 percent of voters want a president who is an outsider instead of having experience. Of those, 70 percent supported Trump.

Trump is not actually poorly educated at all. He has attended some of the most expensive schools in the country, starting with private schools and boarding schools during his primary and secondary education. He went to Fordham University in New York for two years, and then transferred to the Wharton School of Business at the University of Pennsylvania. He graduated with a Bachelor's in economics.

Conservative Washington Post columnist Kathleen Parker said on MSNBC that highlighting who he is — perhaps his upper-class upbringing or Ivy League education — and how he "has crushed the little man on his way to larger and taller monuments to himself" could give Rubio and Cruz a way to break down this support. She explained:

He's done so well with these people with who are high school educated, and I don't mean this in a demeaning way at all, but it's the fact, and the more blue collar workers who really are the heart of America and they think finally somebody is speaking for them but the truth is he is not for them not in his real life and that needs to be highlighted.

Trump has done a good job of playing the everyman, but at the end of the day, he's not. Those wanting change from an outsider should not expect to get much empathy from Trump if he's elected. He's not working hard to get by paycheck-to-paycheck, and he never has. He has skyscrapers across the country with his name on them. Remember when he said that his father had given him a "small loan" of a million dollars?

It's time someone tackle Trump's narrative and truly speak up for the struggling in America. We just might have to wait a while, because it's unlikely to be a Republican. And it's impossible for it to be Donald Trump.